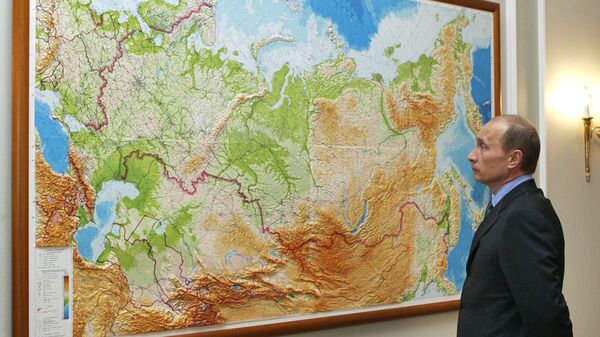 © Sputnik / Dmitry Astakhov
Subscribe
The Western media love to paint the Russian president in a negative light, but any reasonable thinking person understands that this is merely a sign of jealousy, and an attempt to mobilize society by inventing an enemy, Polish news website Obserwator Polityczny suggests.

Will Media Accuse Putin of ‘Being Responsible for Merkel's Haircut' Next?
"Scaremongering [the public] using Putin, whose image is constantly spat upon and served up by the propaganda of some Western countries in the worst possible connotation, actually serves to garner respect for the Russian president in the long term" a recent article in the Polish political news and analysis website Obserwator Polityczny suggests.

"The real cause behind this harassment," the paper playfully argues, "is envy and admiration. Many Western politicians would like to be able to govern in the same way that the Russian president does, and many countries would like to be governed in this way, at least in part."

"Therefore, Vladimir Putin is not really an object of hatred, but of envy, admiration and desire," the publication boldly contends.

"For example, if Mr. Putin was the head of the European Union, not only would there not be any crisis caused by the influx of illegal immigrants, but there wouldn't be any question about a 'Brexit', or about the 'standards of democracy' in Poland. With such a leader, the European Union would be a completely different organization, one which we would very much desire."

"In general," the paper notes, "there's no break from the idea of 'Putin the evil genius', unscrupulously trying to break apart the unity of the 'perfectly functioning' EU, or of NATO, which hands out candy and builds bridges in Afghanistan."

German Investigation 'Heralds New Front in Propaganda War Against Russia'
"Or, we hear from the messengers of the 'evil Putin' that he is bombarding the children of Syria (by the way, the Russians must have very good planes, if they can set their sights specifically to target only children), thus increasing the wave of refugees to Europe; forget about Turkey," the country that's directly along the route of the refugees' path.

"And if that were not enough, we are getting more and more Putin, who is not allowing Europeans to forget about him – here, he is helped by his 'media minions'; the global audience of the RT television channel is growing at such a rate that its rivals are looking for artificial causes, in order to stop their growing competitor. For example, in Germany, checks are being made to see if the Russian intelligence is manipulating public opinion by using the media."

Ultimately, the newspaper sarcastically suggests, "Putin is slowly becoming the explanation for all sorts of plagues and calamities. 'It's raining. Who is to blame? Putin, of course! Not directly, but it's not inconceivable that the Russians are up to something in the upper atmosphere,'" the logic goes.

However, Obserwator Polityczny adds, all is not working as planned. "In the long term," anti-Putin and anti-Russian propaganda "is only contributing to building respect for him and admiration for Russia."

"Even a superficial observer, seeing how much dirt is thrown at Putin, in the end has to ask himself: 'Why? What has he done wrong?' And when all is said and done, all of Putin's guilt can be summarized in one sentence: he is protecting Russian interests, which he, as the first leader of Russia after the fall of the USSR, is able to redefine."

‘Putin’s World Is Open to All Who Wish to Belong’
"How can someone be blamed for loving his country, for respecting it, for doing what's best for it?…" the online paper asks.

Amid the civil war in Ukraine, "NATO is beginning to transfer weaponry to Central Europe," including Poland. "What the consequences of this move will be remain unknown. In any case, rest assured that Putin will be blamed, even as he slowly becomes the most popular and respected politician in the world, Europe included," the paper concludes.