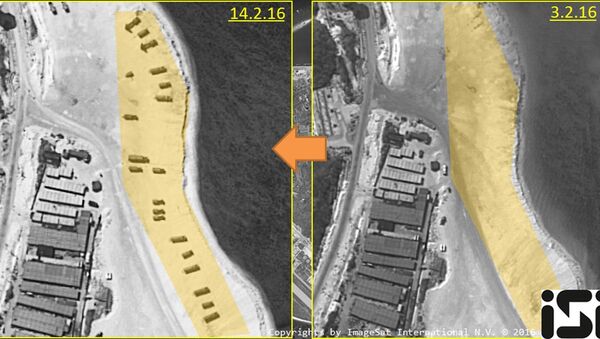 © REUTERS / ImageSat International N.V. 2016
Subscribe
International
India
Africa
China's deployment of its missiles in the South China Sea threatens the naval supremacy of US aircraft carriers in the region.

Is US Heating Up Territorial Disputes in South China Sea to Suppress China?
WASHINGTON (Sputnik) — Beijing’s recent deployment of missiles on islands in the South China Sea and the continued development of advanced anti-ship missiles by competitors threaten to end the naval supremacy of US aircraft carriers, according to a Center for New American Security report released on Monday.

"In recent years, a number of countries, including China, Russia and Iran, have accelerated investments in anti-access/area denial (A2/AD) capabilities such as advanced air defense systems [and] anti-ship cruise and ballistic missiles," the report said. "These capabilities are likely to proliferate in the coming years, placing greater constraints on US carrier operations than ever before."

The United States and Taiwan said last week that China had deployed surface to air missiles on a Woody Island in the Parcel chain in the South China Sea. The deployment marked the latest step in China’s military buildup in the Parcel and Spratly archipelagos, where at least six nations have overlapping territorial claims.

"This state of affairs will impact carrier operations in all theaters; however, in the near term, it will be particularly relevant in the Asia Pacific, where carriers and their air wings play an essential role in mitigating the tyranny of distance and where A2/AD capabilities are most mature," the report noted.

As anti-ship missile technology develops and deployments increase, the United States will be faced with the choice of operating its aircraft carriers at ever-increasing ranges, possibly beyond the unrefueled combat radii of its aircraft, or to assume high risk levels with when operating at close range, the report explained.