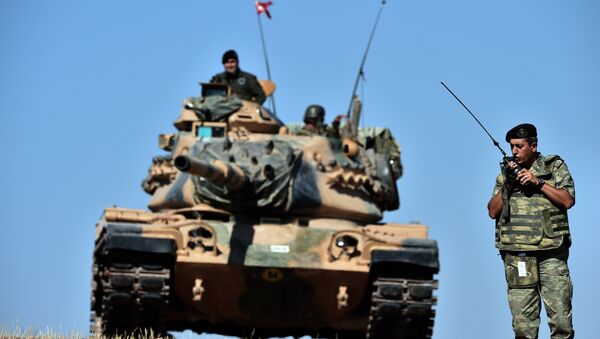 © AFP 2021 / ARIS MESSINIS
Subscribe
The US and its allies in the Middle East are getting desperate amid Russia-backed advances of the Syrian Army, a former US diplomat said.

Dangerous Games: Ankara, Riyadh 'Lack Clear Strategy' on Syria
Despite the latest ceasefire agreement at the Munich security conference, US Secretary of State John Kerry is pushing again for the resignation of Syrian President Bashar al-Assad, in a bid to avert failure of the American policy in the Middle East.

"He [Kerry] has got a lot of pressure from our so-called allies in the region, particularly the Saudis, the Turks, and the Gulf states, for whom removal of Assad and regime change remain their only interest in this fight," Jim Jatras, former US diplomat and GOP Senate policy adviser, said in an interview with RT.

"They’re getting desperate. They see the advances being made by the Syrian Army with Russian air support, and they see that the terrorists are facing what could be the endgame, and they’re trying to find some way to pull a rabbit out of the hat," he added.

Earlier, Saudi Arabian foreign minister Adel al-Jubeir warned that if the Syrian political process fails, Assad will have to be removed by force.

Last week Saudi Arabia announced that it was seriously mulling a ground operation in Syria aimed against Islamic extremists.

In turn, Turkey recently announced it was ready to deploy troops to fight the Kurdish Democratic Union Party (PYD) in northern Syria.

Damascus Calls Turkey's Shelling of Syria 'Direct Support of Terrorists'
Syrian Kurds are enemies of the Turkish government which has labeled them "terrorists" and supporters of the Kurdistan Workers’ Party (PKK).

At the same time, Syrian Kurds are fighting against Daesh and Syrian opposition groups, whom Turkey openly has backed in their fight against the Syrian government.

On February 13, Turkish forces began shelling the position of Kurdish People's Protection Units (YPG), a Kurdish group linked to the PYD, in Syria's Aleppo region. Turkish forces bombed a village and an airbase that were recently captured by Kurds.

"If Aleppo is about to be liberated by the Syrian army, if the terrorist corridor to Turkey is in danger of being closed, it is something possibly close to endgame for the regime-change-based powers," Jatras pointed out.

For Washington, pushing for Assad’s resignation is part of the approach it has applied to the Middle East, particularly in Libya and Iraq.

"That was the line we took in saying Muammar Gaddafi must go, Saddam Hussein must go, and look how well that turned out," he ironically remarked.

000000
Popular comments
Yet, a month ago, according to Kerry and even Erdogan, he "didn´t have to go quite yet". It´s astonishing that the US and it´s underdogs still believe they can dictate who the President is going to be, because we all know, who is going to win a free and fair election in Syria and it wont be some of the US puppets that has spent the last 5 years in 5* hotels and never been to Syria since the 70´s...