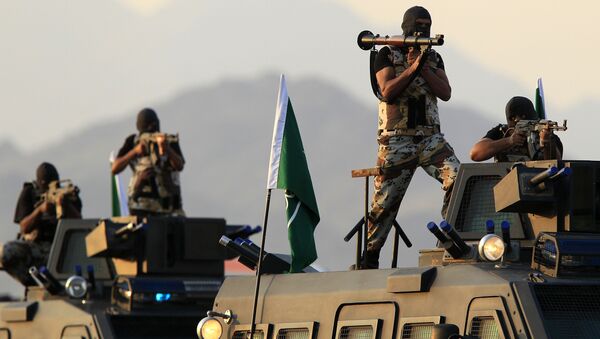 © AP Photo / Hassan Ammar
Subscribe
Turkey and Saudi Arabia apparently lack a clear strategy on how to act regarding the Syrian conflict.

The Syrian Sea of Hostility
Both Ankara and Riyadh appear confused by making contradictory statements on the Syrian issue, said Georges Masse, head of the International Affairs department at the American University of Science and Technology in Beirut.

"They talk about a ceasefire and at the same time threaten to invade. Something’s not right," he told RIA Novosti. "They lack a clear strategy, they are utterly confused. If they attempt to enact a military scenario, that would mean the end of the world for them. They have to be mad to try and do this."

Masse also pointed out that both Turkey and Saudi Arabia are facing a host of internal problems.

If Ankara were to invade Syria it will inevitably clash with the Syrian Kurds, which may lead to a Kurdish uprising in Turkey. At the same time, Riyadh is already engaged in a protracted and costly conflict in Yemen, so opening a 'second front' in Syria would hardly be a prudent move.

Meanwhile, Saudi Arabia deployed a contingent of military aircraft to the Turkish Incirlik airbase. Turkey’s Foreign Minister Mevlut Cavusoglu said that the warplanes were sent there to take part in anti-Daesh operations, adding that Ankara and Riyadh could also launch a ground operation against terrorists in Syria.

"If there is a strategy (against Daesh) then Turkey and Saudi Arabia could enter into a ground operation," he declared.

Earlier it was also reported that Saudi Arabia was ready to send its special forces as part of US-led coalition.

000000
Popular comments
the strategy can be summarized thus: just bomb everything

mike.holstein
13 February 2016, 20:36 GMT2
000000
Newsfeed
0
New firstOld first
loader
LIVE
Заголовок открываемого материала
Access to the chat has been blocked for violating the rules . You will be able to participate again through:∞. If you do not agree with the blocking, please use the feedback form
The discussion is closed. You can participate in the discussion within 24 hours after the publication of the article.
To participate in the discussion
log in or register
loader
Chats
Заголовок открываемого материала
Worldwide
InternationalEnglishEnglishMundoEspañolSpanish
Europe
DeutschlandDeutschGermanFranceFrançaisFrenchΕλλάδαΕλληνικάGreekItaliaItalianoItalianČeská republikaČeštinaCzechPolskaPolskiPolishСрбиjаСрпскиSerbianLatvijaLatviešuLatvianLietuvaLietuviųLithuanianMoldovaMoldoveneascăMoldavianБеларусьБеларускiBelarusian
Transcaucasia
ԱրմենիաՀայերենArmenianАҧсныАҧсышәалаAbkhazХуссар ИрыстонИронауОssetianსაქართველოქართულიGeorgianAzərbaycanАzərbaycancaAzerbaijani
Middle East
Sputnik عربيArabicArabicTürkiyeTürkçeTurkishSputnik ایرانPersianPersianSputnik افغانستانDariDari
Central Asia
ҚазақстанҚазақ тіліKazakhКыргызстанКыргызчаKyrgyzOʻzbekistonЎзбекчаUzbekТоҷикистонТоҷикӣTajik
East & Southeast Asia
Việt NamTiếng ViệtVietnamese日本日本語Japanese中国中文Chinese
South America
BrasilPortuguêsPortuguese
NewsfeedBreaking
08:43 GMTOpposition Parties in Maldives Join Hands in Calling For End to Indian Military Presence
08:29 GMTMexican Army Detains 'Priority Target' in 2019 Massacre of Mormon Family, State Attorney Says
08:10 GMTGun Involved in Killing Halyna Hutchins Was Reportedly Used by Crew Off-Set for Fun
07:34 GMTTop UK Army Bosses Accused of 'Covering Up' Killing of Kenyan Woman by British Soldier
06:11 GMTAs Israel Preps to Vaccinate Kids Against COVID-19, Some Say They Will Be Against 'Coercion'
06:06 GMT‘Inexperienced, Green’ Armourer on Alec Baldwin Film Set Described as ‘Careless With Guns’ Before
06:03 GMTHow Long Can Chelsea Survive Without a Striker?
05:22 GMT6.2 Magnitude Earthquake Shakes Taiwan - EMSC
05:14 GMTUS Still Ready For Dialogue With North Korea Without Preconditions, Special Envoy Says
04:31 GMTFacebook Struggled to Curb Violent, Divisive Content in India, Internal Documents Show
03:23 GMTWho’s the Best Football Player in the World?
02:45 GMTAmerican Film Institute Establishes Scholarship in Memory of Halyna Hutchins
02:30 GMTMore Than 10,000 Sequoias Must Be Removed After California Wildfires, National Parks Reveal
01:00 GMTWho has the Edge Between Manchester United and Liverpool?
00:12 GMTBritish Military Brings Over 100 People Who Had Left Afghanistan to UK - Defense Ministry
YesterdayUS Seeking Clarity Over Turkey’s Intention to Declare US Ambassador Persona Non Grata
YesterdayUS Authorities Getting Veterans Involved in Resettlement on Afghan Refugees - Reports
YesterdayBiden’s Popularity Drops More Than That of Any Other US Leader Since End of WWII - Poll
Yesterday‘Rust’ Director ‘Gutted’ by Fatal Shooting of Halyna Hutchins on Set
YesterdayPotty-Mouthed PM: Broadcaster Blocks Boris Johnson's Remarks on Gay Men, Muslim Women