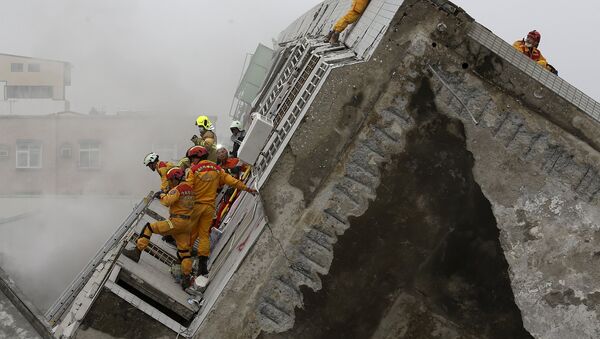 At least eight people died and a number of residential buildings collapsed when a 6.4 magnitude earthquake hit southern Taiwan early Saturday morning. The quake was originally reported as a magnitude 6.7.

'Enormous' 6.4 Quake Shakes Taiwan
According to local television reports, multiple buildings have partially collapsed in Tainan, a city of two million people, and local authorities fear that as many as 250 people could remain trapped inside a collapsed 17-story building.

Power outages in many areas have been reported.

​Tremors were felt also in mainland China threatening to delay rail traffic in the southwest as workers checked for damage to a local railway, Xinhua news agency reported.

"@taispy: Earthquake we just had in Taiwan is no joke. Hope all are safe in Tainan: https://t.co/CYzGmvSzDV pic.twitter.com/9nYkn9ZWHY"

The US Geological Survey said the earthquake was centered 27 miles southeast of Tainan and occurred at a shallow depth of 6.2 miles, which likely amplified its effects.