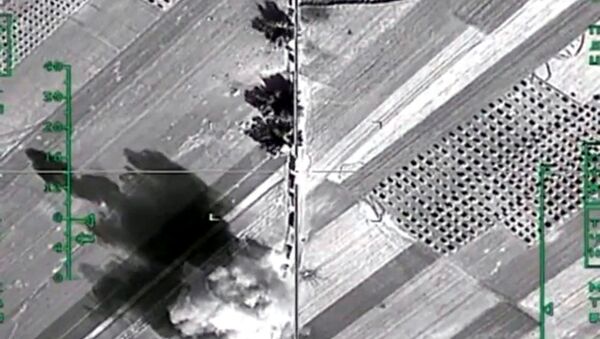 © Ministry of defence of the Russian Federation
/
Go to the photo bank
Subscribe
US Operation Inherent Resolve spokesman Col. Steve Warren said that he cannot confirm the the Russian Air Force airstrikes on civilian oil tankers in Syria.

"I’ve seen those reports," Warren stated in a briefing. "We are not prepared yet to confirm it."

The spokesman said the Russian Defense Ministry released a video of a strike on oil tankers about a month ago, but added he has not tracked any additional strikes since.

Russian Jets Hit Some 600 Terrorist Targets in Syria in Past Four Days
The Islamic State, also known as Daesh, is a designated terrorist group outlawed in the United States, Russia and in many other countries.

The Islamic State controls large swaths of land in Syria, Iraq and Libya, and has earned hundreds of millions of dollars annually by selling smuggled crude oil on the black market.

In December, the Russian General Staff said that Russian combat aircraft had destroyed more than 1,200 terrorist tanker trucks carrying oil and oil products. Russia began an aerial campaign against the Islamic State in September 2015 on the request of the Syrian government.

000000
Popular comments
Simply answer! if there was a contract for oil transporting between Syria and Turkey, and if that contract involves large volumes of trucks and civilian drivers, and those got killed were under this contract, then Russia should take note. But if there were no contract/deal whatsoever, but a large convoy of trucks are transporting oils into Turkey, then, Russia has not done enough. What Russia should do is using NAPALM bombs so that more trucks are destroyed. Sometimes, the one calling 911 is the aggressors and the guilty parties.
peaceactivist2
3 February 2016, 20:28 GMT1
000000
They're not ready , they've also no proof.