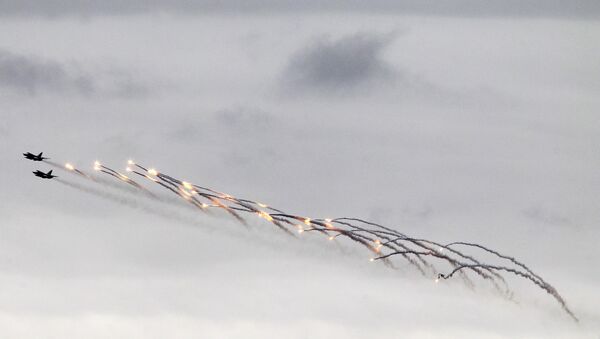 Russian combat jets have hit some 600 terrorist targets in Syria over past 4 days, the Russian Defense Minsitry said.

More than 40 tons of humanitarian aid have been delivered to the Syrian areas blocked by terrorists, including Deir ez-Zor, Konashnkov added.

"The command of the Russian air group in Syria continues to deliver food and first aid to the Syrian territories blocked by the terrorists. Yesterday, we delivered over 40 tons of the humanitarian aid to residents of Deir ez-Zor and other besieged areas," the spokesman added.

​According to Konashenkov, the airstrikes were launched against Daesh forces holding strategic elevated positions in the province.

The Russian air forces have destroyed oil pumping station and column of the oil tanker trucks in the Syrian provinces of the Raqqa and Aleppo, Maj. Gen. Igor Konashenkov told journalists.

Moreover, using the aerial reconnaissance we spotted a column of oil tanker trucks carrying smuggled oil near the suburbs of Herbol, Aleppo province. The trucks were headed to the Turkish border, Konashenkov stressed. The Russian Su-24 jet destroyed the column of 24 oil trucks during the combat mission, the spokesman underscored.

As acts of provocations, terrorists have increased attacks on civilians in order to blame the Syrian Army for the shelling later, Igor Konashenkov noted.

"Seeing that they have no chance of halting the government troops' advance, terrorists have resorted to provoking the army forces by attacking civilians with artillery and mortar strikes and then trying to pin the blame on the Syrian Army," the spokesman said.

According to Konashenkov, Ahrar ash-Sham terrorist group and al-Nusra Front have launched rocket and artillery strikes on the Foua and Kefraya towns of the Idlib province.

“A Russian Su-34 strike aircraft bombed terrorist strongpoints in the vicinity of the village of Bgelia in Deir ez-Zor province, where earlier Daesh militants attempted to terrorize local populace by carrying out a mass execution of about 300 civilians,” Konashenkov said.

He also added that three cargo trucks loaded with munitions, two off-road vehicles with mounted ZU-23 twin-barreled autocannons were destroyed and about 60 terrorists were killed during the airstrike.

“A Su-25 strike aircraft destroyed a militant’s munitions depot in the vicinity of Tell Rifaat in Aleppo province. Surveillance units confirmed the detonation of the ordnance stored within the facility and the building’s complete obliteration,” he said.

Also, aerial reconnaissance detected six militants’ truck convoys heading from the Turkish border towards the city of Aleppo. An airstrike conducted against these assets by a Su-34 warplane resulted in the destruction of over 20 off-road vehicles carrying weapons and personnel.

“Five enemy jeeps with mounted heavy machineguns and mortars were destroyed by Su-25 strike aircraft in the Syrian province of Hama,” Konashenkov added.

"Several days ago, a patriotic opposition unit provided us with information about Daesh terrorist field camp location near the town of Kissin, Homs province," he said.

A group of about 30 Daesh militants led by field commander Abu Khaldoun have fled from the Syrian province of Latakia following the liberation of the Salma village, the Russian Defense Ministry said Tuesday.

​According to Konashenkov, militant activity in the area of the Jabal al Akrad mountainous region significantly decreased after the liberation of Salma.

Whole militant units are evading further participation in hostilities along with mass desertion, the spokesman said.

The Syrian forces liberated Salma, which was a terrorist stronghold in western Syria, on January 12.

Since September 30, Russia has been conducting a separate aerial campaign in Syria against Daesh following a request from Syrian President Bashar Assad.

Syria has been in a state of civil war since 2011. The country’s government is fighting a number of opposition forces, as well as radical Islamist militant organizations, including the Nusra Front and Daesh (ISIS/ISIL), a group outlawed in a number of states, including Russia.