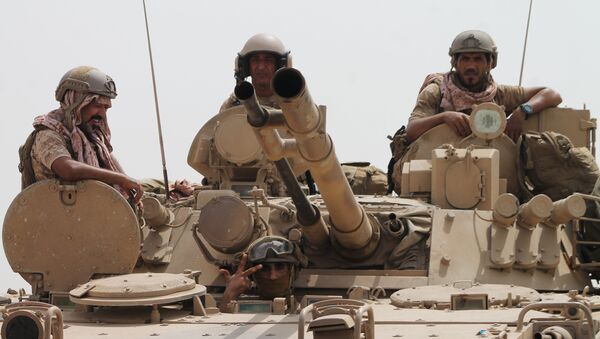 A cross-party committee of MPs have called on the UK to immediately suspend the sale of arms to Saudi Arabia and set up an independent investigation into the conflict in Yemen, in what campaigners have described to Sputnik as a "very significant" move that could trigger a change in British policy.

The UK’s International Development Select Committee called on David Cameron to halt the sale of arms to Saudi Arabia following widespread evidence that the Saudi-led coalition was targeting civilian areas and engaging in the indiscriminate bombing of Yemen.

The government, which significantly increased arms sales to Riyadh following the announcement of the Saudi-led campaign in March 2015, has supplied export licenses for US$4.4 billion (£3 billion) worth of arms to the Gulf kingdom in the past year.

London has also been accused of providing logistic and military assistance to Saudi efforts in Yemen – a claim the government has denied.

In a letter to International Development Secretary Justine Greening, the committee called on the UK government to withdraw opposition to an independent international investigation into Saudi military action in Yemen, saying it was "unthinkable" to trust a Saudi-led inquiry to be objective.

"It is a longstanding principle of the rule of law that inquiries should be independent of those being investigated. Furthermore given the severity of the allegations that the Saudi-backed coalition has targeted civilians in Yemen, it is really unthinkable that any investigation led by coalition actors would come to the conclusion that the allegations were accurate," committee chairman Stephen Twigg wrote.

The committee was critical of the government’s claim that the Saudis had not breached humanitarian law as a result of its intervention, while MPs were scathing of the UK’s decision to dramatically increase arms sales in recent times.

"We received evidence that close to £3bn worth of arms licences have been granted for exports to Saudi in the last six months. This includes £1bn worth of bombs rockets and missiles for the three-month period from July to September last year – up from only £9m in the previous three months," the MPs said.

"We need an independent, international fact-finding mission to uncover the truth. Until then we should cease selling arms to Saudi Arabia […] All parties to this conflict should review their obligations under international law and undertake to put civilians and humanitarian work above other interests."

The intervention from the International Development Select Committee follows similar concerns previously raised by members of the European Parliament and a leaked UN report, which stated that Saudi Arabia was in breach of humanitarian law in Yemen.

Andrew Smith, spokesperson for the Campaign Against Arms Trade (CAAT) told Sputnik the committee’s involvement was "very significant", given that it involves criticism from David Cameron’s own MPs.

"I think this is very significant. It’s clear that there’s a growing opposition to the Saudi bombardment of Yemen, which is having a terrible humanitarian cost. I think the fact that politicians from all sides of the House of Commons have united on this message is a very good sign. It’s also a sign that there’s public opposition to it as well."

Mr Smith noted the UK’s long history of supporting and arming Saudi governments, saying that he was hopeful it would bring about a change in wider national policy.