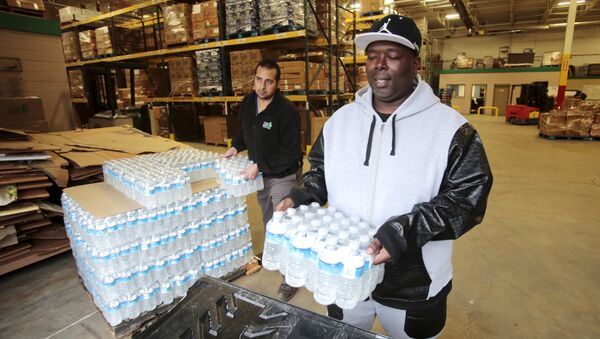 The federal government has played a major role in covering up the poisoning of the water supply in Flint, Michigan, Marsha Coleman-Adebayo, a whistleblower and former senior policy analyst for the federal Environmental Protection Agency (EPA) told Radio Sputnik.

Beijing Issues Red Alert Over Air Pollution
Coleman-Adebayo told Radio Sputnik that the EPA, entrusted with the protection of the public's water supply, knew about the poisoned drinking water in Flint but "silenced" the problem. EPA water expert Miguel Del Toral, whose responsibility was to make sure that water systems meet federal standards, identified potential contamination problems with Flint's drinking water in February 2015 and circulated an internal memo on the subject the following June. According to Coleman-Adebayo, instead of reacting to the warning, the EPA sidelined Del Toral by discrediting him among colleagues.

"What that allowed the states to do was to continue to lie to the people, to tell them to basically…not be concerned that the water was green and blue and yellow, that they should just quietly continue to consume," she said.

Coleman-Adebayo accused the EPA of regarding whistleblowers, including Del Toral, as enemies of the state.

"It's not just this generation that will be poisoned by the lead in the water in Flint, but lead has the characteristics of being able to affect the DNA, so this could be…poisoning of generations," she stressed.

State Officials in Flint Got Bottled Water 10 Months Before the Public
Coleman-Adebayo also noted that the population of Flint is predominantly African-American and poor, and offered these points as possible reasons the EPA decided that they "could not care about this community that was drinking fecal matter…and bathing in it."

"We are really looking at a genocidal act quite frankly…literally targeting the African-American community as well as the white working class community."

According to Coleman-Adebayo, the blame lies not just on local authorities, but on the federal government as well, because Obama administration political appointees knew about the situation and did nothing.

"My experience in the federal government is that we were all told just to shut up and to be very happy we had jobs at an agency like EPA," she said.

Coleman-Adebayo stated that the poisoning of drinking water in Flint is an act of terrorism, and called for the prosecution of those responsible.

"What we need to demand is that criminal enforcement brings charges against [EPA contractors] who had a hand in covering up and hiding this mass poisoning of children in Flint, Michigan."

On January 16 Barack Obama declared a state of emergency in Flint, Michigan, where the water has become contaminated with lead and other pollutants. To save money, officials had switched the water supply from the original Detroit source to the Flint River, known for its high corrosive salt content. Flint residents have been drinking poisoned water with dangerous levels of lead and other pollutants for almost two years.