US to Deploy Newest Missile Attack Drones in South Korea 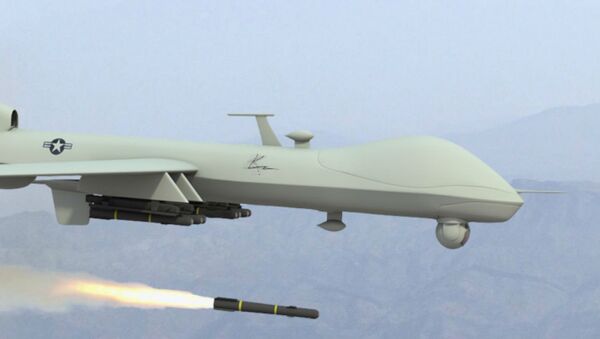 The United States intends to deploy in South Korea the newest MQ-1C Gray Eagle drones, that can not only conduct reconnaissance flights, but also missile attacks, a South Korean news outlet reported Wednesday.

TOKYO (Sputnik) — According to the Chosun Ilbo, citing a US military source, deployment of Gray Eagle unmanned aerial vehicles (UAV), that are superior in combat characteristics to drones used in Iraq and Afghanistan, is scheduled for July. Equipped with night vision cameras, they can make flights lasting up to 30 hours, and are designed to monitor the areas along the demilitarized zone separating South and North Korea.

South Korea, US, Japan Set Up Data Sharing Channel on N Korea's Missiles
With the new drones the US and South Korean armed forces will be able to strike helicopters, as well as enemy's tank within distance of about 4,9 miles. For that purpose, each vehicle is equipped with four anti-tank missiles "Hellfire", four glide bombs GBU-44/B, and also can be equipped with air-to-air missiles "Stringer," according to the source.

The United States began a new strategic deployment of weapons in South Korea, following a hydrogen bomb test announced earlier in the month by Pyongyang.

The United States has already deployed a B-52 strategic bomber capable of carrying nuclear cruise missiles and up to 31 metric tons of bombs to South Korea.

On January 6, Pyongyang claimed it had carried out its first hydrogen bomb test, triggering condemnation from the international community which denounced the test as provocative and undermining stability in the region.