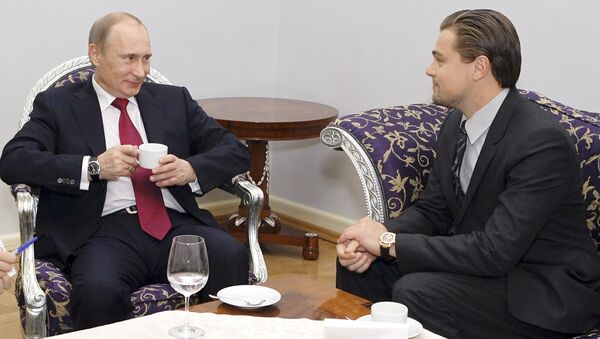 In an interview with German newspaper Die Welt, Hollywood star Leonardo DiCaprio admitted that he would love to play Vladimir Putin onscreen if provided with such an opportunity.

World
This is What Impressed Bild During Its Interview With Putin
Dicaprio said that for him bringing the image of the Russian president onscreen would be a ‘very, very interesting task.’

The American actor met with Vladimir Putin a few years ago during a meeting in St. Petersburg to discuss joint efforts to save Siberian tigers.

“My foundation has provided financial support to some projects to protect these wild cats. Putin and I, we talked about protection of these wonderful animals, not about politics,” Dicaprio told Die Welt.

According to the actor, he is fascinated with Russian history. “Playing Lenin would also be interesting. Also, I would love to play Rasputin.”

According to DiCaprio, there should be more films on Russian history, “Russia unites so many stories almost of Shakespearean character. For an actor, it is extremely exciting.”

Currently, DiCaprio is starring in the movie ‘Revenant’ which is nominated for twelve Oscars. The actor has been nominated for the best male role for the fifth time.

He also has continued to be active in the political sphere. During a meeting on climate in Paris, DiCaprio who has for decades engaged in fight against global warming, appeared as a speaker and in 2014 the UN made him an Ambassador of Peace, the paper reported.

However, the actor does not intend to repeat the path of Ronald Reagan or Arnold Schwarzenegger and go into politics, Die Welt wrote. “At the moment I cannot imagine myself becoming a politician although I would not completely rule out something like that,” Leonardo DiCaprio said.