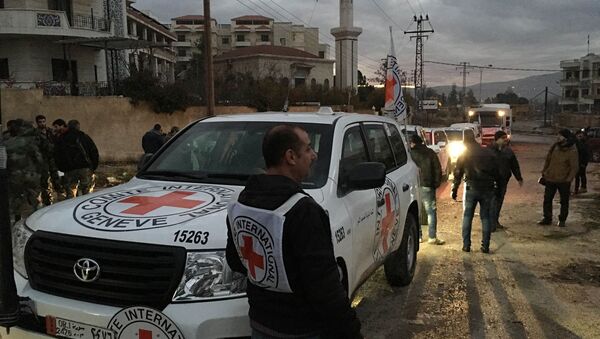 UN head Ban Ki-moon has condemned all parties of the Syrian conflict for creating a humanitarian disaster in the town of Madaya, where people are dying from starvation. Madaya, as media reports say, has been besieged by government forces and has not received food supplies for months.

Western Media ‘Lied’ About Withdrawal of Iranian Soldiers From Syria
Vanessa Beeley, an investigative journalist and peace activist, told Radio Sputnik in an exclusive interview that the hype around Madaya is nothing but a propaganda campaign launched by George Soros NGOs and Western countries, which are interested in perpetrating regime change in Syria.

The town received first aid on January 11, but it was seized by local rebels supported by the West. They have raised prices to an unbelievable level – a kilogram of rice costs $250.

In her article, Beeley pointed out that the Western media failed to notice the plight of the villages of Kafraya and Foua in Idlib province, where the situation is worse.

“This is a completely fraudulent media and government campaign to highlight the case of Madaya while ignoring the very real siege and vicious attacks on Kafraya and Foua in the Idlib region which are of course Shia villages.”

The activist further said that it is important to bear in mind that these NGO operatives on the ground who are effectively getting the information outwards are part of 'George Soros’ malevolent nest of propaganda that has been created in Syria for their purpose. We have regime changing operatives working on the ground in Syria that serve to derail any internal or international resolution.”

Syria: US-Backed NGOs Spread Myths About Civilian Deaths in Russian Strikes
She goes on to name the NGOs that, according to her, are Soros funded. Beeley said that NGO’s such as the White Helmets and the Syrian Observatory for Human Rights are used to justify the West’s policy of arming and supporting the insurgency in Syria.

When talking about Madaya town, Beeley said that on October 19, a person from the Red Cross went to the town and at that point they left a two-month supply of food there. She went on to explain how the al-Nusra Front and other groups with links to al-Qaeda are occupying Madaya.

“If we think back to operation Mockingbird from the 1950’s, it is not so exaggerated that this speculation is propaganda with the intent of regime change. What we are seeing, in my opinion, is a clear alliance between Israel and Saudi Arabia to ferment sectarian violence in Syria, destabilize Iran and strengthen forces that are a raid against the Hezbollah resistance stronghold in an attempt to undermine the axis of resistance in Syria, which is heated by our fraudulent media and the Soros directed NGOs,” Beeley concluded.