Dobrynya and Other Animal Celebrities of 2015 (VIDEO) 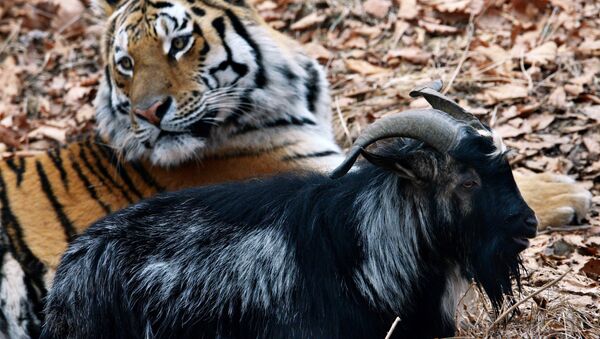 When the endless stream of political and economic news becomes too much, why not relax and switch your attention to something more lighthearted like animals for example.

The stories of friendship and kindness, world records and funny antics – here’s a collection of stories about some of the animals that drew everyone's attention in 2015.

Dobrynya, a German Shepherd puppy, was gifted by Russian police officers to their French colleagues to replace Diesel, 7-year-old Belgian Malinois, a member of a French anti-terrorist police unit who was killed during the siege in Saint-Denis that targeted terrorists involved in the Paris attacks.

A French bulldog named Otto set a new Guinness World Record by speeding on his skateboard through a human tunnel comprised of 30 people.

This incident occurred in Sun City, Arizona, when two surprisingly agile llamas broke out and made a run for it. It took the authorities about 20 minutes to catch the runaways.

The Tiger and the Goat

An unusual occurrence took place in Far Eastern Safari Park in Russia’s Primorsky Territory, as a tiger named Amur refused to eat Timur, a goat given to him as a meal. The two animals continue to be friends to this day.

Chris, a sheep in Canberra, was officially recognized as the woolliest sheep ever recorded by Guinness World Records. The weight of his fleece? 41.1 kilograms!

Heavy rain that hit the Georgian capital of Tbilisi on June 14 caused a flooding which inflicted serious damage to the city zoo, allowing some of the animals to escape. This hippo was among the runaways, calmly wandering in the city streets and apparently ignoring the pesky bystanders.