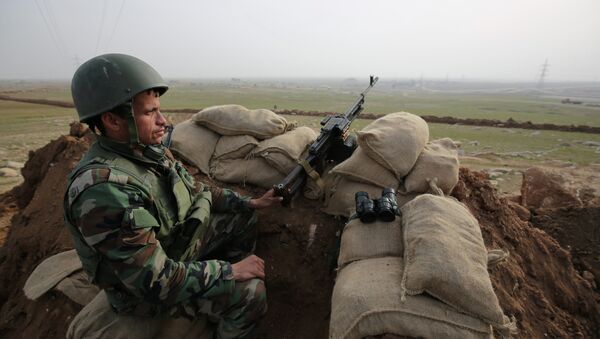 © AP Photo / Bram Janssen, File
Subscribe
US Defense Secretary Ashton Carter said that the United States will provide equipment to the Kurds in northern Iraq in an attempt to help take back the Iraqi city of Mosul.

Iraqis Fear US Backs Turkish Land Grab in Mosul Region
WASHINGTON (Sputnik) — The United States will provide equipment to the Kurds in northern Iraq in an attempt to help take back the Iraqi city of Mosul from the Islamic State (ISIL or Daesh), US Defense Secretary Ashton Carter said in a release on Thursday.

"The next major shipment from us is two brigades-worth of equipment to be used to arm the two brigades that they will contribute to the encirclement of Mosul," Carter said. "That's [retaking Mosul] an important objective, and precisely our equipment is going to make that possible."

Carter’s comments come after the Kurdish Rudaw Media Network reported on Wednesday that a suspected Daesh attack at a northern Iraqi base killed two soldiers trained by Turkish troops and injured six others. The outlet added that the three-hour attack targeted the Gudad military base in the Mosul town of Bashik.

The US defense secretary said this recent shipment of weapons isn’t the only time the United States has been giving arms to the Kurdish Peshmerga military forces.

"And we have been arming the Peshmerga from the very early days," Carter added. "It hasn't just been us. There are I think 12 countries — but anyway, a large number, who also — who are part of the coalition- who also sent arms."

On December 4, Turkey deployed about 130 troops and 25 tanks to a base in Iraq's Mosul region in a move regarded by Baghdad as illegal. Turkey started withdrawing its troops on December 14, after Iraq had officially filed a complaint with the UN Security Council.

000000
Popular comments
I wonder how many of these weapons are going to be "accidentally" dropped to Daesh?