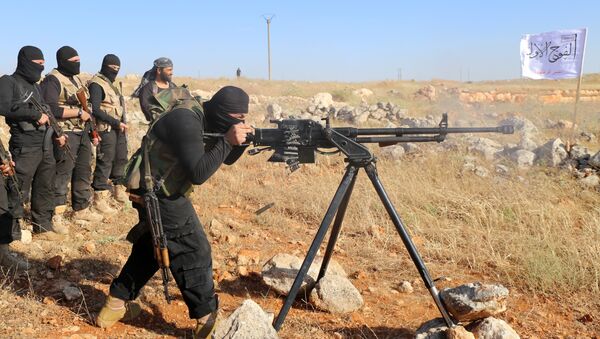 Russia's increased activity along the Syrian-Turkish border indicates clearly that the Syrian conflict has entered its final phase, geopolitical researcher Tony Cartalucci stresses, adding that the true sponsors behind this conflict are now stepping in overtly.

It should be clear now to those, who criticized Russia's air campaign as ineffective, that their prognosis has proved wrong, Bangkok-based geopolitical researcher and writer Tony Cartalucci underscores.

"For those that have criticized Russia's air campaign, claiming conflicts can't be won from the air without a ground component, it should be clear by now that the Syrian Arab Army is that ground component, and has dealt ISIS [Daesh] and al-Qaeda its most spectacular defeats in the conflict," Cartalucci points out in his latest article for New Eastern Outlook.

Hidden Agenda? Why Washington Wants Turkey to Send Troops to Syrian Border
According to the researcher, when this corridor is sealed up and the flow of supplies halted, Daesh (ISIL/ISIS), al-Nusra Front and other NATO-backed factions will eventually "atrophy" and will be eradicated by the Syrian Arab Army.

Apparently for this very reason the West has rushed to flood the region with its military assets; the same cause could have lain at the root of Turkey's ambush of the Russian Su-24 in the Syrian airspace, the researcher believes.

However, Russia's increased activity in the Syrian-Turkish border region demonstrates that the Syrian conflict has entered its closing phase.

"With Syrian and Kurdish forces holding the border east of the Euphrates, the Afrin-Jarabulus corridor is the only remaining conduit for supplies bound for terrorists in Syria to pass," Cartalucci explains.

Is Turkey Waging War on Russia in Crimea, the Caucasus, and Central Asia?
Meanwhile, Syrian forces have started moving east towards Euphrates from Aleppo. Cartalucci suggests that then the Syrian Arab Army will move north to the Syrian-Turkish border near Jarabulus.

On the other hand, it appears that the Russian Air Force is planning to cut off the terrorists' supply lifeline right at the border, near Afrin, Ad Dana and Azaz, according to the researcher. The Syrian Arab Army, in its turn, will maintain control over the region.

Cartalucci calls attention to the fact that, inexplicably, the US-led coalition had never targeted Daesh's lifelines during its year-long military campaign.

Putin: Russia Has Evidence Su-24 Shot Down to Protect Daesh Oil Deliveries
"Obviously, any nation truly interested in defeating ISIS [ISIL/Daesh] would attack it at its very source — its supply lines. Military weaponry may have changed over the centuries, but military strategy, particularly identifying and severing an enemy's supply lines is a tried and true method of achieving victory in any conflict," the researcher underscores.

And it is not the only oddity about the Syrian conflict.

In reality, the Syrian conflict has never been truly a "civil war," the researcher emphasizes, referring to the amount of support for the militants fighting against the legitimate Syrian government and the huge number of foreigners joining Daesh and al-Nusra Front, an al-Qaeda affiliate.

"With that support being cut off and the prospect of these militants being eradicated, the true sponsors behind this conflict are moving more directly and overtly to salvage their failed conspiracy against the Syrian state," Cartalucci stresses.

"What we see emerging is what was suspected and even obvious all along — a proxy war started by, and fought for Western hegemonic ambitions in the region, intentionally feeding the forces of extremism, not fighting them," the geopolitical researcher emphasizes.