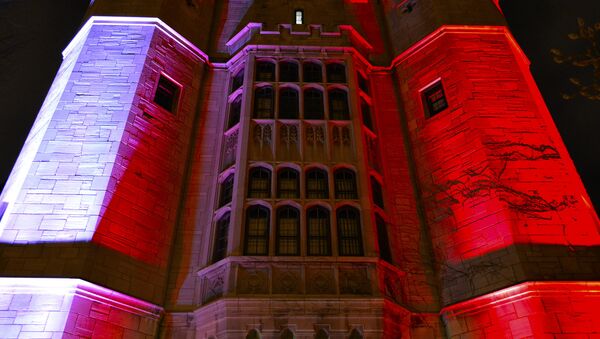 © Flickr / CJ
Subscribe
International
India
Africa
The FBI has been notified of a mysterious spray-painted message that appeared at a university site in Youngstown, Ohio. Terrorist threat? Or student prank in profoundly bad taste?

“We are coming” was painted on a large rock, a famous site for student messages at Youngstown State University (YSU) in northeastern Ohio. The warning was accompanied with the notorious symbol of the self-proclaimed Islamic State (ISIL) terror group.

My brother and sister attend Youngstown State and this was on their campus rock today. So theres that. pic.twitter.com/vbibAiXUiw

“Youngstown supports ISIS,” another message read, using an alternate acronym for ISIL, and “France deserves destruction” was also written on the rock.

Pictures of the disturbing messages were quick to spread on social media before campus maintenance personnel covered them over with white paint.

As of Monday afternoon, YSU students had repainted the rock with a US flag design, according to media reports. “Pray for Paris,” “God bless America,” and “Land of the free” took the place of the earlier graffiti.

Following the incident, the university administration sent a message alert informing the campus community that the painting wasn’t associated with any credible threat.

“Messages of concern were found on the rock. Police are investigating. No credible threat to campus currently. Any info call YSU Police: 330-941-3527,” the alert read.

Police says they are searching for suspects. The local FBI has been also contacted over the issue.