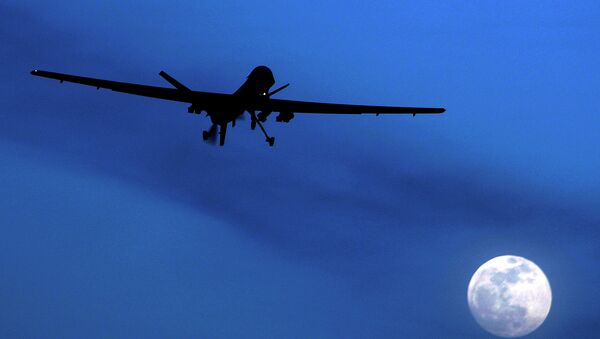 © AP Photo / Kirsty Wigglesworth, File
Subscribe
US drone strikes not only kill many innocent civilians as a result of collateral damage, but also have lead to a greater number of people joining the ranks of ISIL, according to the German newspaper Die Zeit.

Four former US pilots wrote an open letter to President Barack Obama, Secretary of Defense Ashton Carter and CIA Head John Brennan asking them to stop the US drone program since it causes more people to join ISIL and other terrorist organizations, the German newspaper said.

US drone strikes are nothing, but a "program of the recruitment of new terrorists," the pilots said in the letter, Die Zeit reported.

It's a well-documented fact that drone strikes, apart from their primary targets, kill a lot of innocent bystanders. For example, US drone strikes in Pakistan and Yemen might have "mistakenly" killed close to 1,200 innocent civilians between 2002 and 2014, the UK human rights organization Reprieve said in November of 2014.

The US government certainly failed to deliver to on its promises after President Obama claimed in 2012 that the drone strikes were extremely precise and didn't kill civilians.

Exceptional Right to Kill: US Losing Moral Compass, Expanding Drone Strikes
Sometimes the US military would make a mistake and kill innocent people, believing that they were their intended targets. The same names would appear a few times on a secret US kill list, authorized personally by President Obama.

One time, for example, the name of one "high-value target" appeared as many as six times on the US kill list, which means that if a drone strike managed to kill the target on the sixth attempt, then five other times wrong people were killed.

Furthermore, even if drones do hit the right target, innocent individuals are killed by collateral damage, simply because there were in close proximity to the strikes. The Reprieve report said both women and children have been caught in the crossfire during drone strikes.

Now imagine a teenager whose parents are mistakenly killed by a US drone strike. What is he going to do? Most likely he will join ISIL out of anger with a desire to carry out revenge against US soldiers or any Westerners for that matter, especially considering the effectiveness of ISIL propaganda.

More Civilians Killed by US Drone Strikes Than Al-Qaeda Terrorists
As US drone strikes have killed thousands of innocent civilians across the world since the start of the US drone warfare, there might be easily tens of thousands of individuals who have rushed to join the ranks of ISIL seeking revenge for their loved ones. The US government would have simply avoided it with a wiser and more humane strategy.

The former US pilots also added that Guantanamo Bay Prison has the same effect — radicalizing people further and making them join jihadists.

Thus, the US government has not only tried to cover up the death of innocent civilians during its drone strikes, but it also has caused the radicalization of thousands of people who then joined the ranks of terrorist organizations, the pilots' letter said.