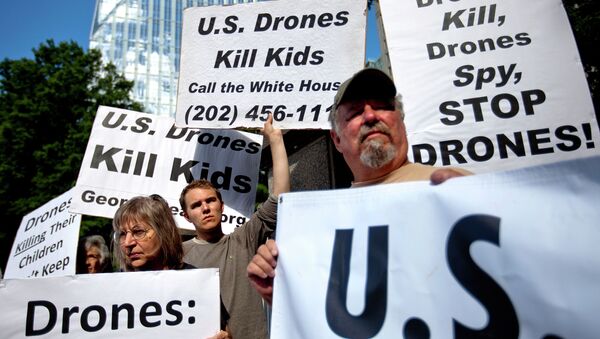 © AP Photo / David Goldman
Subscribe
America's worldwide assassination drone program has been recently brought into the spotlight; does Washington really have the right to kill people without trial, asks former US congressman Ron Paul, bemoaning the fact that the US is losing its moral compass.

A new US government whistleblower has stepped in and shed light on Washington's controversial worldwide assassination program.

Former US congressman Dr. Ron Paul called attention to the fact that the Pentagon is de-humanizing its targets: they have no rights, no dignity, no humanity and they are never referred to by their names.

"But I think there is more than just de-humanizing the enemy: the process [of killing] de-humanizes the person [drone operator]… The individual who does the killing has to be de-humanized as well. They [the US government] condition people to do this. This is so bizarre and so contrary to humanity and contrary to what I think should be the exceptional position for America," Dr. Paul said in a conversation with Daniel McAdams for Liberty Report.

#DronePapers: US New Global Assassination Program Steadily Expanding
To complicate matters even further, a huge number of "targets" eliminated during drone strikes turned out to be innocent people. However, the Pentagon has seemingly become accustomed to it: it classifies these victims as "enemies killed in action."

"I'm still optimistic enough that the human race can change and actually make progress. I think it's a natural instinct. I don't think war is natural," Dr. Paul stressed, adding that it is absolutely "unnatural" to allow those in power to manipulate the US people through Washington's propaganda machine and de-humanize them.

"And they [the government] do it in the name of goodness and exceptionalism," Paul added with a touch of bitterness.

"Some now, who are participants in this policy, recognize that things aren't going so well. Some of these people say: 'Yes, there is a down side to this and maybe we shouldn't kill them so quickly. We should be doing more capturing, we should have more Guantanamos and Abu-Ghraibs so we could get more information.' They don't say: 'Hey, you know what we can do is that we can make more torture chambers and get this information'," the former US congressman noted ironically.

Insolvable Paradox: Russia Eradicating Al-Qaeda in Syria, US Arming It
Paul underscored that the question still remains open why the people of America are still unable to wake up and recognize that something really sinister is going on in their country.

The US government should not meddle in the domestic affairs of other countries in order to replace legitimate regimes with those which are far worse, he noted. Still, Washington is in denial of any wrongdoing.

Furthermore, according to US investigative reporter and war correspondent Jeremy Scahill, the Pentagon is planning to significantly expand the number of US drone flights in the next four years. Military commanders would be given greater firepower. Reportedly, the number of flights would be increased by 50 percent by 2019, including both surveillance and lethal strikes.

000000
Popular comments
The US losing its moral compass? Dear Sputnik, you're too generous. Washington has long ago lost its moral compass. And no, Dr. Ron Paul, Washington doesn't do it in the name of exceptionalism and goodness. It does it in the name of the dollar.
Robert
20 October 2015, 20:39 GMT
000000
The US took its moral compass and tossed it into a wood chipper a long time ago.
jas
20 October 2015, 22:12 GMT
000000
Newsfeed
0
New firstOld first
loader
LIVE
Заголовок открываемого материала
Access to the chat has been blocked for violating the rules . You will be able to participate again through:∞. If you do not agree with the blocking, please use the feedback form
The discussion is closed. You can participate in the discussion within 24 hours after the publication of the article.
To participate in the discussion
log in or register
loader
Chats
Заголовок открываемого материала
Worldwide
InternationalEnglishEnglishMundoEspañolSpanish
Europe
DeutschlandDeutschGermanFranceFrançaisFrenchΕλλάδαΕλληνικάGreekItaliaItalianoItalianČeská republikaČeštinaCzechPolskaPolskiPolishСрбиjаСрпскиSerbianLatvijaLatviešuLatvianLietuvaLietuviųLithuanianMoldovaMoldoveneascăMoldavianБеларусьБеларускiBelarusian
Transcaucasia
ԱրմենիաՀայերենArmenianАҧсныАҧсышәалаAbkhazХуссар ИрыстонИронауОssetianსაქართველოქართულიGeorgianAzərbaycanАzərbaycancaAzerbaijani
Middle East
Sputnik عربيArabicArabicTürkiyeTürkçeTurkishSputnik ایرانPersianPersianSputnik افغانستانDariDari
Central Asia
ҚазақстанҚазақ тіліKazakhКыргызстанКыргызчаKyrgyzOʻzbekistonЎзбекчаUzbekТоҷикистонТоҷикӣTajik
East & Southeast Asia
Việt NamTiếng ViệtVietnamese日本日本語Japanese中国中文Chinese
South America
BrasilPortuguêsPortuguese
NewsfeedBreaking
21:28 GMTTreasury to Use ‘Extraordinary Measures’ Through December 3 to Avoid Debt Ceiling
21:12 GMTTop 10% of Richest Americans Own About 90% of Stocks on US Markets - Report
21:10 GMTProject Veritas Source Says Asylum Claims to be ‘Fast-Tracked’ Without Congress Oversight
21:00 GMTChicago Chief: ‘Unvaccinated Cops Face Denied Retirement Benefits’
20:44 GMTTrump Sues House Panel Probing January 6
20:15 GMTDOJ Asks US Supreme Court to Re-suspend Texas’ Anti-Abortion Law After Lower Court Drops Ban
19:41 GMTWhite House Declines to Comment on Report China Tested Nuclear-Capable Hypersonic Missile
19:29 GMTTrump to Give Sworn Deposition in Mexican Protesters’ Lawsuit
19:23 GMTFrom 'Favourite of Presidents' to 'Test Tube Secretary': World Responds to Colin Powell's Death
19:04 GMTUK Daily COVID-19 Cases Almost 50,000 - But are Fatalities Also Rising?
18:48 GMTNATO Regrets Russia's Decision to Suspend Work of Missions
18:25 GMTIran Maintains Huge Arsenal of Missiles, Drones Despite Sanctions, Commander Says
18:25 GMTUS 'Not Pessimistic' About JCPOA Vienna Talks With Iran, But Says They Cannot Go on Indefinitely
17:24 GMTRoma Boss Jose Mourinho Blasts Juventus After Ugly Spat Erupts Between Players of Serie A Teams
17:05 GMTMeet Alexandra Hunt, a Former Stripper Who is Running For US Congress in Pennsylvania
17:04 GMTRemembrance Service for MP Amess in Westminster
16:32 GMTFBI Reportedly Helping Secure Release of 17 Missionaries Taken Hostage in Haiti
16:21 GMTUS Setting Up DHS Migration Monitoring Center to Track Illegal Aliens' Movements, Reports Say
16:19 GMTNo Room for Error: Democratic Strategists Pessimistic About Party's Prospects in 2022 Midterms
16:14 GMTSecond Largest US Television Operator Sinclair Broadcast Hacked With Ransomware