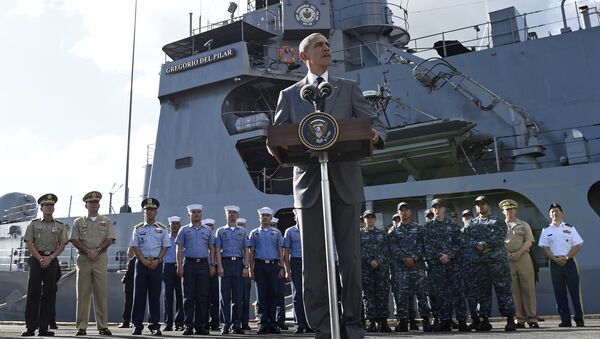 © AP Photo / Susan Walsh
Subscribe
With an eye towards China, US President Barack Obama on Tuesday announced that the United States will transfer two ships to the Philippine navy to help it navigate and patrol its territorial waters.

Obama said the ships – one US Coast Guard cutter, one research vessel – were part of a broader American plan to scale up assistance to naval forces in Southeast Asia, the Associated Press reported.

While the president never mentioned China by name, it is clear that the transfer comes in response to China's moves to assert control in the disputed waters of the South China Sea.

Obama said the United States had an "ironclad commitment" to the Philippines and a mutual commitment to free and safe navigation at sea.

"More capable navies, in partnership with the United States, are critical to the security of this region," Obama said.

The president also said he would seek for Congress to approve another $140 million in maritime security aid to Southeast Asia next year.

While China claims more than 80% of the South China Sea, there are overlapping claims from Malaysia, Taiwan, Brunei, Vietnam, and the Philippines. The territorial dispute has caused a row between Beijing and Washington, which has refused to recognize Chinese sovereignty claims in the region.

Roughly $5 trillion in trade passes through the South China Sea annually, and China views control of the waters as a key to its rise in economic and military power.