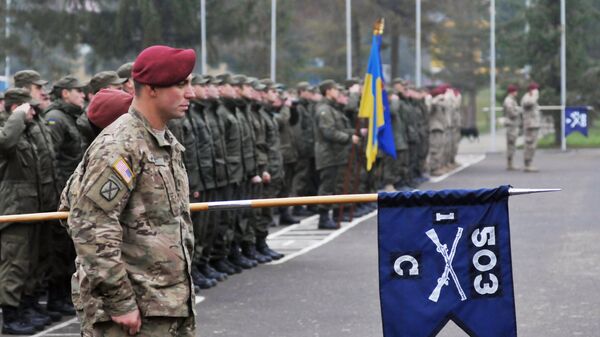 © Sputnik / Stringer
/
Go to the mediabank
Subscribe
International
India
Africa
Even though Ukraine’s dream of joining NATO may never come true, the alliance will eventually gain control over the country’s armed forces and paramilitary units, a Russian defense analyst said on Tuesday.

“It does not look like Ukraine will join the Western defense alliance because, according to the NATO Charter, member-states must help a fellow member in the event of a conflict. But in the case of Ukraine, NATO does not need this,” Viktoria Legranova said in an interview with Sputnik.

“What it needs is military-political and, if necessary, combat-stage control over the Ukrainian military,” she added.

Ukraine to Build New Wall With Russia, This Time on the Sea
NATO’s work with Ukraine is two-pronged: to achieve full compatibility with its military standards and establish the necessary command and control infrastructure there.

“As a result, NATO will be able to set up a network of tactical operational centers across Ukraine to control the country’s armed forces and also the paramilitary groups, active there. If, for some reason, the government slips out of [Western] control or a new president comes to power, these paramilitary units could be used to restore the status-quo,” Viktoria Legranova noted.

According to Ukraine’s new military doctrine, by 2020 the country’s armed forces are to become fully compatible with NATO standards.