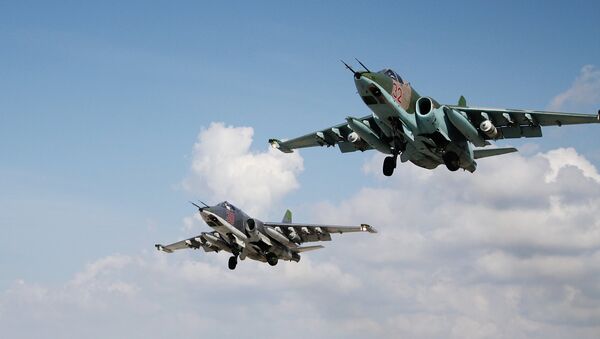 © Sputnik / Dmitriy Vinogradov
/
Go to the photo bank
Subscribe
Despite officially denying any cooperation, Russia and the US secretly coordinate their air campaigns in Syria through Tel-Aviv to avoid collisions of aircraft, according to intelligence sources speaking to Israeli media.

Last Thursday, Russia’s Ministry of Defense announced the creation of a "hot line" between the Russian and Israeli militaries. That channel provides both parties with a direct link in order to avoid incidents between aircraft over Syria.

"The first stage of training was conducted yesterday [Oct. 14] on cooperation between Russian air forces and the Israeli air force to avoid dangerous incidents in the sky above the Syrian Arab Republic," a statement from the ministry read.

On Sunday, personnel from both militaries continued that coordination, practicing the procedures necessary for avoiding accidental collisions.

According to military and intelligence sources speaking to Debka File, Arab-speaking flight controllers will likely stand ready on Russia’s end of the hotline at Al-Hmeineem air base near Latakia. Russian-speaking officers will man Israel’s end, and according to Israeli media, Western air controllers will use that hotline to coordinate their own aircraft, rather than establish their own direct channels with Moscow.

Communication is vital in the increasingly crowded skies over Syria. Russia’s anti-terror campaign began on September 30, and has since carried out hundreds of sorties against the self-proclaimed Islamic State terrorist group.

The US-led coalition has continued its own bombing campaign, though without the authority of the legitimate government of Syrian President Bashar al-Assad. While no collisions have yet taken place, there have been close calls.

But despite air traffic concerns, Washington has refused Moscow’s offers to establish a similar hotline.

"We’re not interested in doing that, as long as Russia is not willing to make a constructive contribution to our counter-ISIL effort. Russia has its own agenda right now that they’re pursuing on their own," White House spokesman Josh Earnest told reporters.

"So it’s not particularly surprising to me that President Putin would resort, in some desperation, to try to…convince us to join them. But the fact is that is a request that’s fallen on deaf ears."

In reality, however, the US is coordinating actions of its aircraft with Russia, but is doing so through Israel instead of establishing its own direct "hot line" with Moscow, according to Israeli intelligence and military sources speaking to Debka File. Due to political reasons, however, the US can't admit it, insisting that the two nations continue to endanger their pilots by not informing each other about their military flights.

On Sunday, the US and Israel also began a massive military exercise known as Blue Flag. Including US, Israeli, Greek and Italian air units, those drills will last for two weeks, adding even more air traffic to already overcrowded airspace.

000000
Popular comments
I have a great plan for coordination for the US and Israel, "Stay out of Syria!"
jas
20 October 2015, 01:46 GMT1
000000
The US neocon extremists are still butt hurt from Sept. 30th.
Zhukov
20 October 2015, 01:59 GMT1
000000
Newsfeed
0
New firstOld first
loader
LIVE
Заголовок открываемого материала
Access to the chat has been blocked for violating the rules . You will be able to participate again through:∞. If you do not agree with the blocking, please use the feedback form
The discussion is closed. You can participate in the discussion within 24 hours after the publication of the article.
To participate in the discussion
log in or register
loader
Chats
Заголовок открываемого материала
Worldwide
InternationalEnglishEnglishMundoEspañolSpanish
Europe
DeutschlandDeutschGermanFranceFrançaisFrenchΕλλάδαΕλληνικάGreekItaliaItalianoItalianČeská republikaČeštinaCzechPolskaPolskiPolishСрбиjаСрпскиSerbianLatvijaLatviešuLatvianLietuvaLietuviųLithuanianMoldovaMoldoveneascăMoldavianБеларусьБеларускiBelarusian
Transcaucasia
ԱրմենիաՀայերենArmenianАҧсныАҧсышәалаAbkhazХуссар ИрыстонИронауОssetianსაქართველოქართულიGeorgianAzərbaycanАzərbaycancaAzerbaijani
Middle East
Sputnik عربيArabicArabicTürkiyeTürkçeTurkishSputnik ایرانPersianPersianSputnik افغانستانDariDari
Central Asia
ҚазақстанҚазақ тіліKazakhКыргызстанКыргызчаKyrgyzOʻzbekistonЎзбекчаUzbekТоҷикистонТоҷикӣTajik
East & Southeast Asia
Việt NamTiếng ViệtVietnamese日本日本語Japanese中国中文Chinese
South America
BrasilPortuguêsPortuguese
NewsfeedBreaking
19:31 GMTUS DoJ Seeks to Strip Steve Bannon's Defence of Main Evidence Ahead of Criminal Contempt Trial
19:30 GMTJust 3 in 5 US Republicans Trust Doctor Advice, Down 13 Points During Pandemic – Poll
19:13 GMTState Department Spokesperson Price Briefs Press in Washington, DC
18:27 GMTUS Slaps Commander of Iran's IRGC Basij Forces With Sanctions
18:18 GMTBiden Warns Putin of Economic Sanctions and Other Measures in Event of Ukraine Military Escalation
18:18 GMTWashington's Major Intersection Blocked by Protesters Demanding Cut to Defense Budget
18:05 GMTCapitol Riot Probe: Mark Meadows to Cease Cooperation With Jan. 6 Panel
17:59 GMT80th National Pearl Harbor Remembrance Day Held in Hawaii
17:53 GMTProposed US Defense Spending Bill Does Not Include Nord Stream 2 Sanctions
17:45 GMTMinsk Introduces Embargo on Some Goods in Response to Western Sanctions
17:37 GMTPentagon: Terrorist Threat to US From External Attacks Lowest Since 9/11
17:30 GMTUS Judge Rules Against Coronavirus Vaccine Mandate for Federal Contractors
17:17 GMTIOC Executive Board Holds Press Conference Amid US Diplomatic Boycott of Beijing Olympics
16:51 GMTIsraeli Prime Minister Claims Country Is 'Fighting Off Forces of Evil' Every Day
16:51 GMTApple CEO Reportedly Lobbied Chinese Officials to Get Preferential Treatment in Country
16:44 GMT'F**k You': Rittenhouse Hits Back at LeBron James After Basketball Star Doubts Tears in Court
16:38 GMTCan It: Elon Musk Rips Joe Biden’s Build Back Better Bill, Calls on Senate to Not Pass It
16:31 GMTUS Would Urge Germany to Halt Nord Stream 2 Pipeline if Russia Invades Ukraine, Reports Say
16:16 GMTMan Kills Family, Himself Over Fake Vaccine Certificate in Germany, Reports Say
15:42 GMTDrug Sniffer Dog Van Spotted Outside Parliament After Cocaine Use Reported to Cops