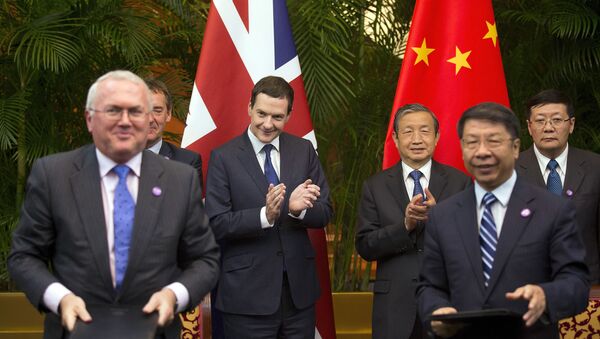 © AP Photo / Andy Wong
Subscribe
Security sources have expressed concern over Britain's determination to warm-up relations with China to attract billions of dollars-worth of infrastructure finance ahead of a state visit next week by President Xi Jinping.

UK Chancellor George Osborne in September led a week-long trade mission to China in an effort to win new business and attract investment into Britain for infrastructure projects — the most important of which being the new nuclear power programs.

Underneath talk of win-win economics there are still areas of potential tension between UK & China — @RobinNiblett: http://t.co/S5gN7Yu6rq

Ahead of the visit, his office said:

"Britain aims to increase cooperation and understanding between the two countries and open up billions of pounds of potential opportunities between what remains the world's fastest growing major economy and the UK."

In a speech in Shanghai, Osborne hailed:

"…a golden decade for both of our countries. Britain and China: we'll stick together."

However, senior figures in the security and intelligence services are said to have expressed concerns over allowing China such influence within national infrastructure. "There is a big division between the money men and the security side," a security source told The Times.

"The Treasury is in the lead and it isn't listening to anyone — they see China as an opportunity, but we see the threat."

According to international law firm Pinsent Masons the UK energy sector will be the biggest target for Chinese capital, with investment in projects including nuclear energy, wind power generation and photovoltaic power generation could be set to reach US$67.2 billion (£43.5bn) by 2025. The real estate and transport sectors could receive US$56 billion (£36bn) and US$29.4 billion (£19bn) respectively over the next decade.

1/ The Tories give China a stake in Britain's nuclear industry. 2/ China bans me because of a film I made about the art there. Go figure.

Richard Laudy, head of infrastructure at Pinsent Masons, said: "As the need to modernize UK's major infrastructure gets greater by the day, the projected influx of Chinese investment into UK infrastructure is expected to be a welcome boost to the construction industry in particular and UK economy as a whole.

"As a foreign investor China is going to become increasingly important for UK infrastructure by 2025. This means UK-China partnerships need to grow over the next decade."

However, intelligence sources in the UK have long warned of Chinese cyber espionage, particularly towards the energy industry. In 2007, Jonathan Evans — then head of MI5 — wrote to a number of British firms warning that:

"For some time, the Security Service has been aware of an increasing level of Chinese electronic espionage… directed at a wide range of public and private sector organizations globally, including in the UK."

China Main Victim of TPP Trade Deal - Ex Mercosur Secretariat Director
He wrote that targeted industries included: "defense, energy, automotive, finance, petrochemicals and IT… any company that holds commercially sensitive material, including intellectual property and commercially sensitive material, the theft of which could benefit China. I strongly advise your company considers its exposure to this threat."

The warning from security services will add to the UK's diplomatic woes ahead of President Xi Jinping's visit. Liu Xiaoming, China's ambassador to London warned Friday against any mention of China's human rights record during the visit. Labour Party leader Jeremy Corbyn has said he will mention the matter either at a state banquet organized by the Queen or during a private meeting with the Chinese leader at Buckingham Palace ahead of the banquet.