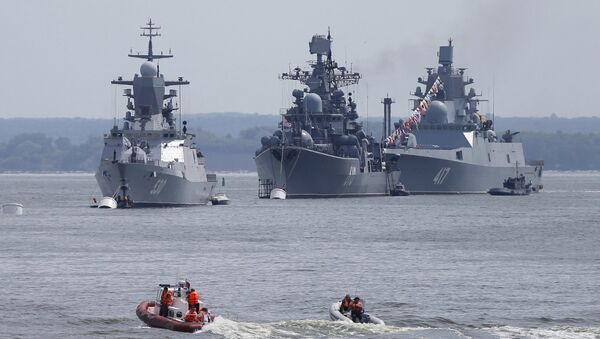 © REUTERS / Maxim Shemetov
Subscribe
International
India
Africa
In typical alarmist fashion, a US Navy official has warned of a Russian "arc of steel" stretching ominously across the entire globe. But, grounded far from reality, touting old stories about Russian aggression only serves to frighten America’s own troops.

"Responsiveness is a new element [in NATO thinking], as we have seen that Russian actions have fully integrated the elements of speed and strategic surprise," Adm. Mark Ferguson, the US Navy’s top commander in Europe said on Tuesday, according to Breaking Defense.

This refers in part to Russia’s entry into the anti-terror crusade in Syria. But the admiral is also concerned with Russia’s "construction of an arc of steel from the Arctic to the Mediterranean."

By "arc," Ferguson is referring to a comparatively small number of Russian naval bases spread across a fairly broad landscape. These stretch from the north of Russia, to the Russian exclave of Kalinigrad, to the Tartus seaport in Syria.

US Hawks Dream Up Russian Threat to Baltics, 'Forget' to Provide Motive

"We are observing the manifestation of a more aggressive, more capable Russian navy," Ferguson said.

This is, evidently, enough to cause concern for the US military, and Ferguson has urged NATO to develop new responses for the possibility of Russian invasions.

"[A future conflict] will be very different," he said. "It will be very focused and happen rapidly on the flanks…[with no] time to build up and then execute."

For proof, the admiral pointed to signs of supposed Russian aggression.

"For our ships in the Baltic and Black Sea, we have seen more aggressive behavior from the [Russian] air forces and the aircraft overflights," he said, adding that if conflict arises, "it will have very rapidly."

"It will combine hybrid and conventional elements, cyber, electronic warfare, jamming,…designed to cripple the decision-making cycle of the alliance. Their capabilities are focused on the creation of ambiguity."

Russia’s military policies, of course, are hardly based on "ambiguity." The Defense Ministry has been nothing but clear on its intentions, particularly in Syria. On Wednesday, Moscow confirmed that it had extended an offer to Washington to cooperate on targeting militants with the self-proclaimed Islamic State terrorist group, but that US officials had failed to respond.

Evidently the Pentagon is too busy preparing for a phantom war with Russia to worry about fighting global terrorism.