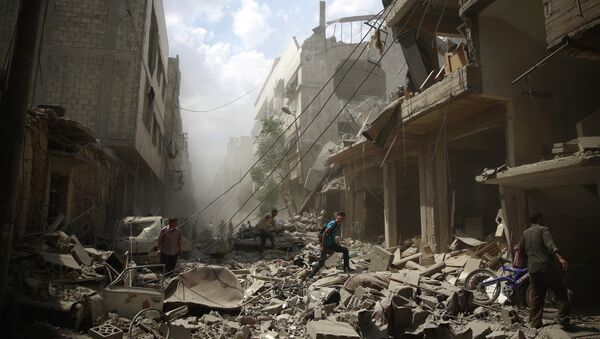 © AFP 2023 / ABD DOUMANY
Subscribe
International
India
Africa
The world should stop deluding itself into thinking that the Obama administration will one day lend a sympathetic ear to Russia's offer to settle the Syrian crisis, US author Stephen Lendman noted, adding that Washington wants to carry out regime change in Damascus by any means possible.

US Using 'Controlled Chaos' Strategy for Social Engineering in Europe
US Secretary of State John Kerry's pledge to engage with Russia and Bashar al-Assad on the Syrian crisis is just a "smoke screen deception," US author and syndicated columnist Stephen Lendman stresses.

"Washington doesn't negotiate. It demands. John Kerry saying he's willing to engage with Russia and Assad on Syria is smoke screen deception. Claiming the need for a political solution belies America's rage for war. Washington undermined the Geneva I and II talks despite Russia's best efforts. Longstanding US plans call for regime change," Lendman emphasized in his article for Global Research.

Soon after the 9/11 tragedy Clark was told that the Pentagon was considering to oust the governments of seven countries, namely Iraq, Syria, Lebanon, Libya, Somalia, Sudan, and Iran.

"As a brigadier general in 1991, Clark met with then Under Secretary of Defense Paul Wolfowitz after Operation Desert Storm. He was told America planned multiple premeditated wars — intending to destabilize and redraw the Middle East, changing its configuration under US-controlled puppet regimes," Lendman narrated.

Europe's Blind Support for US' Foreign Policy Pushing EU Into Abyss
Wolfowitz's ultimate goal was to "clean out those old Soviet client regimes" changing the face of the Middle East forever. According to the then Under Secretary of Defense, Washington had only five to ten years to accomplish this plan.

"Did Congress debate it, he asked? Did presidents explain it? Did America's media report it?…  Absolutely not, and there still isn't," the US author remarked.

Lendman emphasized that according to Julian Assange's book "The WikiLeaks Files: The World According to US Empire," Washington worked out a detailed plan on how it would topple Bashar al-Assad, just before the Arab Spring of 2011.

Assange quoted US diplomatic cables which proposed, in particular: "to use a number of different factors to create paranoia within the Syrian government; to push it to overreact, to make it fear there's a coup."

Furthermore it urged to "foster tensions between Shiites and Sunnis. In particular, to take rumors that are known to be false…or exaggerations and promote them.

Lendman warned that "nothing American officials say is credible."

"Longstanding US plans call for toppling all independent governments. Assad must go remains unchanged US policy," the US author highlighted.