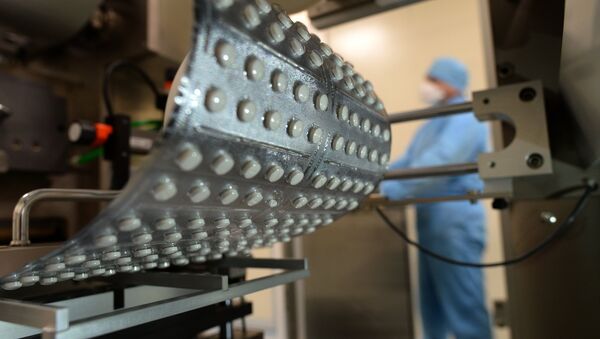 © Sputnik / Sergey Pyatakov
/
Go to the photo bank
Subscribe
A 2001 clinical trial of the antidepressant Paxil wrongly declared the drug safe and effective for teenagers, according to a recent reanalysis of the original data.

The new data analysis, published Wednesday by medical journal BMJ, found that Paxil (paroxetine) can make some teens suicidal and likely to harm themselves.

"The original study says paroxetine is safe and effective for the treatment of depressed adolescents," said co-author Dr. John Nardo, a psychiatrist with the Emory University Psychoanalytic Institute in Atlanta.

"Ours says paroxetine is neither safe nor effective in the treatment of adolescents," Nardo added. "And I don't know of any example where two studies in the literature with the same data ever reached opposite conclusions."

Thousands of people taking Paxil or other psychiatric drugs have committed violent acts, including suicide, experts said, though no firm statistics are available, the New York Times reports. But because many factors could have contributed that behavior, it is not clear who is at risk and who is not.

The original trial, funded by the drug’s marketer, has been controversial since it was published 14 years ago. Critics said it was unconvincing, and alleged that serious side effects had been understated.

A year after it was published, the US Food and Drug Administration declared the trial should be considered "a failed trial."

Despite the controversy, more than two million prescriptions were written for children and teenagers in the United States in 2002. The following year, the FDA mandated labeling for Paxil and similar antidepressants that warned of the risk of suicidal thoughts among children and teens.

The original trial involved 275 kids, between 12 and 18 years old, diagnosed with major depression. They received Paxil, the antidepressant drug imipramine, or an inactive placebo.

The reanalysis showed that neither Paxil nor imipramine was more effective than a placebo. The researchers also considered the increase in harm with both drugs to be clinically significant.

000000
Popular comments
All these antidepressants lower inhibitions, just as all of them warn of an increased risk of suicide for all who take them. Why would an entire nation allow its youth especially to be doped like this? Why is this also taking place mostly in the anglophone world?