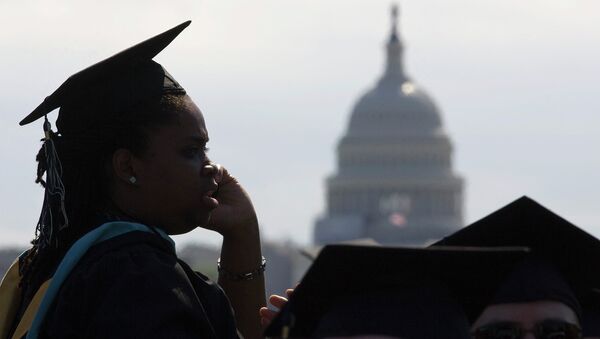 © REUTERS / Jonathan Ernst/Files
Subscribe
What does it feel like to be an American adult forced to continue paying off a student loan? At some point, could you feel so unable to erase the debt you come up with the idea to sell one of your organs?

A large number of former students in the US are reportedly ready to sacrifice their physical well-being and even body parts for the chance to get rid of the loan they took out to attend college, according to a new survey.

MyBankTracker, which touts itself as a provider for smart banking and money decisions, took a survey this summer asking their users if they are ready to sell an organ to repay their student loan.

Respondents were asked — with only ‘yes' or ‘no' as acceptable answers — assuming the participation would erase their student loans, the following: Would you be willing to turn your life into a reality TV show? Would you sell an organ? What about selling half of your possessions — would you do that? Would you ingest a drug that has not been approved by the FDA? And, would you sign up for active duty?

The survey revealed 30 percent of those would agree to sell a spleen if it helped cover the student loan.

One must ask, what it says about the American mentality that so many people would rather forego their organ to get rid of the debt rather than work for the money to pay it off.

If your student loan debt is high relative to your income, you may qualify for the Income-Based Repayment Plan http://t.co/0E74dqLNZL

Despite the evidence, one of MyBankTracker founders doubts that respondents were sincere answering the hot topic question, stressing Americans' inability to face challenges.

"I don't think they're making drastic decisions or would take drastic measures — but what it does tell me is that they'd rather get rid of their debt quicker than adapting to it over time and making it part of your day to day reality," Alex Matjanec said in a recent phone interview about the study.

"They don't want to multitask, they just want to get it out of the way," Matjanec added.

The site determined that the trend in Americans' attitude towards their debts indicate they rather pay off the loan hanging like a sword of Damocles at once rather than incorporate it into their budget.

Matjanec points out that the "get it away from me at all costs" mentality is linked to the fact that 56 percent of those under 30 tend to postpone important life decisions because they have to repay the debt.

I have a relatively modest student-loan balance, two advanced degrees, a full-time job, and NO IDEA when I will EVER be debt-free. America!

Loans for study at a prestigious American university can reach $ 200,000, while the overall amount of debt held by US graduates hovers around $1.2 trillion.

Tuition at four-year public colleges and universities has risen by 50 percent within the past decade.