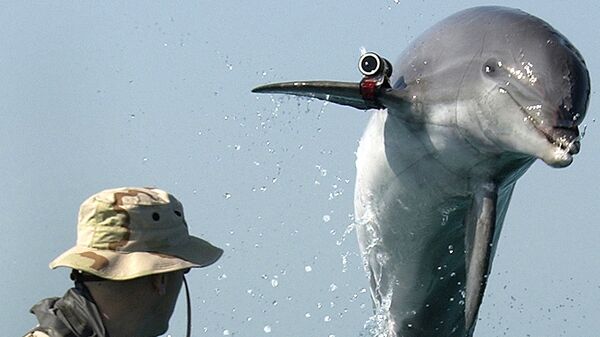 Israeli media has had a field day reporting on claims by Hamas that it has captured an Israeli military dolphin spying for Tel Aviv. The dolphin, said to have been equipped with surveillance devices, including a camera, was reported captured by a naval unit of the Hamas military brigades, local media report.

Hamas Army Radio, alleged to have reported the capture on Wednesday, noted that the errant mammal was caught several weeks ago by frogmen commandos operating just off the coast of the Gaza Strip, controlled by Hamas's political wing and subject to an Israeli blockade.

Hamas frogmen of the kind allegedly used to capture the dolphin spy.

Scientists Plan to Genetically Engineer Animals to be Used by US Military
As Israeli media glibly made clear, espionage allegations against the country by its neighbors involving various birds and sea creatures are not uncommon. In 2013, Egyptian police were reported to have temporarily detained a duck, after a local fisherman saw a device with Hebrew writing attached the bird, believing that it could be used to gather intelligence. In 2012, Turkish media repeatedly alleged that birds tagged with tracking devices by Israeli universities were being used for espionage missions.

Also in 2012, a vulture with an Israeli tag was captured in Sudan, and touted to be a Mossad spy. Israeli officials had to explain that only the vulture itself was being tracked, as part of a study on the migration patterns of the rare species. In 2011, some Saudi Arabian media accused Israel of using a griffon vulture for espionage purposes. In 2010, an official in Egypt's Sinai province said that rumors of Mossad dumping a shark in the Red Sea near tourist areas deserved serious investigation.

World’s Largest Stockpile of Nuclear Weapons Guarded by Flipper
The Times of Israel also sardonically made clear that while "the Israeli Navy maintains a fleet of Dolphin class submarines," Hamas's radio "report made clear that Hamas was talking about a mammal, not a boat." Other media, including i24, said that Israel is not known to have a team of spy dolphins.

Not all Israeli reporting on the matter was so glib. The Jerusalem Post limited its sarcastic commentary, noting only that dolphins are considered by scientists to be some of "the most intelligent animals in all of nature," and adding that they "are considered so advanced that some countries have made use of them militarily."

The United States' Navy's Marine Mammal Program is known to have 85 trained dolphins and 50 sea lions in service, carrying out missions including the guarding of harbors, mine-clearing, and equipment recovery. This includes guarding the arsenal of the US's third largest naval base, located outside Seattle. After the secret program was declassified in the 1990s, officials have revealed that dolphins were used in Vietnam, and in the US's wars in the Persian Gulf, chiefly to keep enemy frogmen from approaching US vessels. 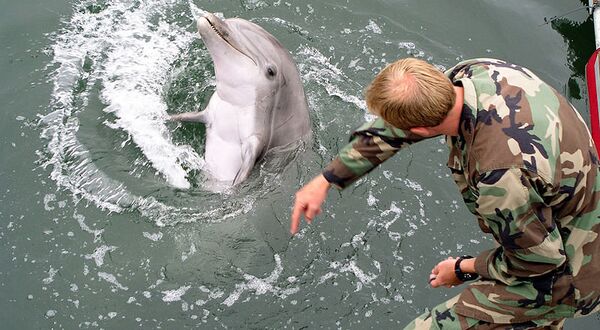 Russian Military Takes Full Control Over Combat Dolphin Program in Crimea
The Soviet Union had a similar program, based in Crimea. When the peninsula broke off from Ukraine and rejoined Russia in March of 2014, the Russian Ministry of Defense assumed control over the Crimean State Oceanarium which, along with the US Navy's San Diego training center, is believed to be one of only two such comprehensive combat dolphin training facilities in the world.
Newsfeed
0
Access to the chat has been blocked for violating the rules . You will be able to participate again through:∞. If you do not agree with the blocking, please use the feedback form
The discussion is closed. You can participate in the discussion within 24 hours after the publication of the article.
To participate in the discussion
log in or register
loader
Chats
Заголовок открываемого материала