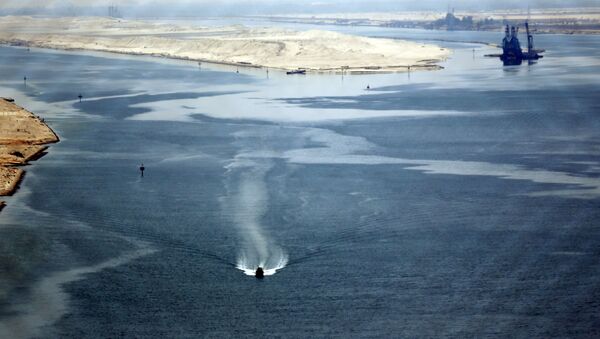 The Silk Road Economic Belt and the 21st-Century Maritime Silk Road, known as the Belt and Road initiatives, proposed by Chinese President Xi Jinping, aim to revive the ancient trade routes between Asia and Europe. The network spans over 60 countries and regions, with a total population of 4.4 billion.

“Egypt can play a main role in China's Belt and Road initiatives due to its strategic geographic location,” said Han Bing, minister counselor for economic affairs with the Chinese embassy in Cairo, reports Xinhua.

Han said that port cooperation should be a priority for China and Egypt as the two sides collaborate in pushing forward the Belt and Road as well as the Suez Canal economic corridor initiatives. Both the harbors at the ends of the Suez Canal have a great influence over the Middle East, Africa and the entire planet in terms of geopolitics and global trade.

Egypt plans to open six new ports and more industrial parks alongside the canal, and launch in the nearby areas projects like a new industrial city, which is capable of hosting hundreds of factories.

“The new Suez Canal area will give the Chinese side more opportunities to invest in Egypt and other countries,” Egypt's former ambassador to China Mahmoud Allam told Xinhua in a recent interview.

Finally Unveiled: Egyptian President Sisi Inaugurates New Suez Canal
Egyptian officials also proclaimed that the new waterway will help increase the canal's annual ship traffic revenues from USD 5.3 billion in 2015 to more than 13 billion and even up to 15 billion by 2023, attracting huge foreign investments and creating thousands of job opportunities.

Analysts believe that the canal is only the beginning, and expect more such development projects in the Suez Canal corridor, which are expected to attract investments worth billions of dollars and produce more jobs.