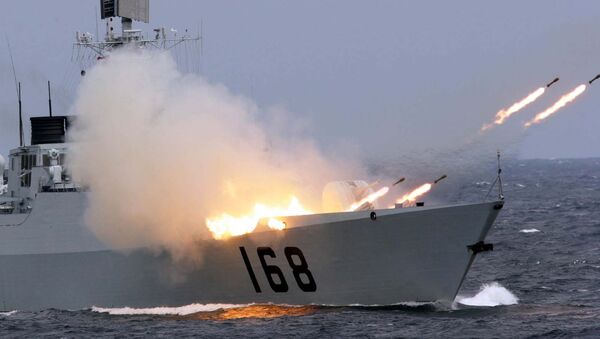 © AP Photo / LI GANG
Subscribe
International
India
Africa
In the latest sign of military cooperation between the two nations, Russia and China will conduct joint naval and air defense drills in the Sea of Japan next month.

Occurring between August 20 and 28, the exercises will take place in the Gulf of Peter the Great, off the coast of Vladivostok, and in the Sea of Japan.

According to Chinese Defence Ministry spokesman Yang Yujun, the exercises will focus on anti-submarine and anti-ship exercises. While the Russian military will supply ships, submarines and fixed-wing aircraft, China will send fighter jets, destroyers, frigates, and supply vessels.

Both nations will dispatch helicopters and marines.

While the exercises are meant to further collaboration between the two global partners, Yang expressed concern that the drills could be used politically by some in Japanese government. As Prime Minister Shinzo Abe’s Liberal Democratic Party pushes for legislation which would send Japanese troops abroad for the first time since World War Two, Yang said certain politicians could be "hyping up" the exercises.

"We hope that certain people in Japan can calmly reflect on what they have done," Yang said during a monthly news briefing.

The drills come amid growing tensions in the Pacific. A number of nations in the region have accused Beijing – largely at the behest of the United States – of encroaching on rival territorial claims. The construction of artificial islands in the Spratly archipelago has sparked protests from Indonesia and the Philippines, both of which have conducted joint military drills with the US in an effort to intimidate China.

Beijing has repeatedly claimed that it has every right to build within its own territory and the islands will be largely used for humanitarian purposes. On Thursday, the Chinese government repeated pleas for calm.

"China is extremely concerned at the United States’ pushing of the militarization of the South China Sea region," Yang said during the news briefing.

"China and Japan have not yet delineated maritime boundaries in the East China Sea, and China does not recognize the Japanese side’s unilateral marking out of a so-called 'median line,'" China’s Foreign Ministry said in response, according to Reuters.

Earlier on Thursday, the Russian Pacific Fleet also successfully test launched a missile system in the Sea of Japan.

Speaking to Sputnik on Wednesday, a Chinese Defense Ministry spokesman stressed the importance of naval cooperation between Beijing and Moscow.

"Business cooperation in the naval sphere plays an important role in the development of trusting strategic bilateral relations."