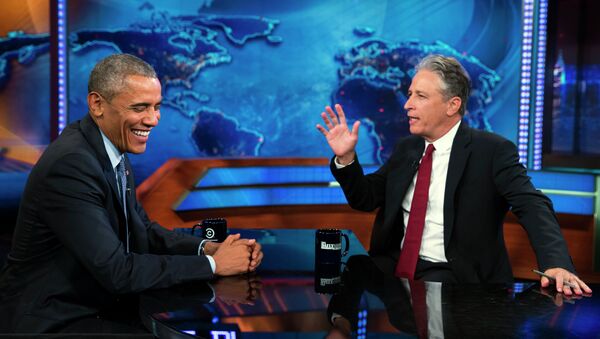 Last Tuesday, President Barack Obama made his latest appearance on the Daily Show to promote the newly cemented Iran nuclear deal. The venue was no surprise. Despite the fact that the Emmy-winning show is a satirical newscast, multiple polls have shown host Jon Stewart to be one of the most trusted names in news.

That places the comedian, set to retire next week, above Katie Couric, above recently defamed Brian Williams, and far above any of the crowd over at Fox News, which he frequently lampoons.

"I’d be hard-pressed to think of a person who spoke with the same amount of authority to that big of a group of people," Eric Lesser, a former White House aide, told Politico.

With that kind of reputation, President Obama has made a number of appearances on the show, especially as a way to court the millennial vote during election seasons. But a new report from Politico shows that the set of the Daily Show wasn’t the only place the pair discussed politics.

On at least two occasions, Stewart was summoned directly to the Oval Office so that the Obama administration could explain its side of events.

"Jon Stewart was a key influencer for millennials," Dag Vega, a former White House coordinator for media relations, told the New York Times. "They relied on him for an honest take on the news, and the president and senior staff know that."

The first known occasion was in 2011, in the run-up to Obama’s reelection campaign. Meeting for roughly an hour over a cup of coffee, the president laid out his response to liberal critics.

"The White House itself was quite interested in at least explaining its side of the story to Jon Stewart," former economic aide Austan Goolsbee told Politico.

The second meeting occurred in 2014, only hours before Obama went on air to threaten Russian President Vladimir Putin over what the West has consistently described as the “seizure” of Crimea.

The specifics of what Stewart and Obama discussed are unknown.

But whatever sway the president managed to have over Stewart was also a two-way street. White House officials also describe the impact that some of Stewart’s segments had on public policy.

In 2009, Stewart ran a segment critical of the Obama administration’s decision to remove combat veterans from the Veterans Affairs healthcare plans, so long as those individuals had private insurance.

"That can’t be right," Stewart joked on air.

Only one day later, the White House abandoned those plans.

"I can’t say that because Jon Stewart was unhappy policy changed," former presidential advisor David Axelrod told Politico. "But I can say that he had forceful arguments, they were arguments that we knew would be heard and deserved to be answered."

"He talked to young people," Arizona Senator John McCain told Politico. "Young people watch him. Young people vote. So I don’t think that there’s any doubt that with his comedy, that he had an effect on the workings of government."

With Stewart’s final episode airing next Thursday, the Daily Show will be hosted by Trevor Noah, a comedian from South Africa.