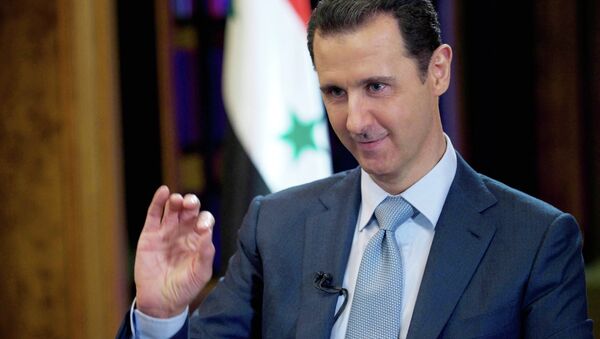 WASHINGTON (Sputnik) — The United States is not planning to oust Syrian President Bashar Assad militarily because force alone will not solve the crisis in Syria, a State Department official told reporters.

US and Turkey to Provide Air Cover for 'Moderate' Syrian Rebels
On Sunday, Assad told a national televised audience that he supports political dialogue, but believes a solution is unattainable until terrorist groups operating in Syria are defeated.

On Friday, Secretary of State John Kerry announced that he will be meeting with Russian Foreign Minister Sergei Lavrov in the Qatari capital of Doha in August to discuss the situation in Syria.

Earlier in July 2015, Obama stated that the problems in Syria will not be solved without Russia, Iran, Turkey and US partners playing a role.

Syria has been engulfed in civil war since 2011. The Syrian government has been engaged in fighting the so-called moderate opposition as well as a number of extremist insurgent groups, including the Islamic State.

More than 220,000 people have been killed in the fighting and 11 million have been displaced, according to the UN.