Varoufakis Confirms 'Plan B' Payment System in Case of Grexit 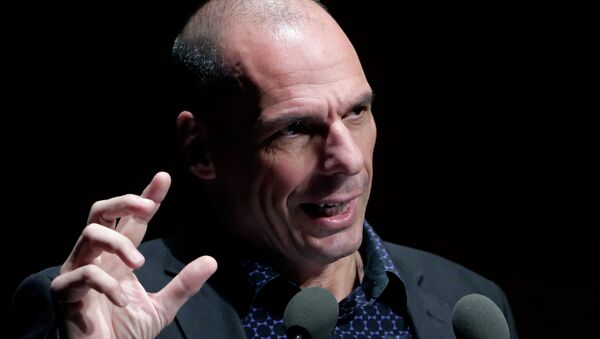 Greek Bailout Talks to Begin Amid Secret Drachma Currency Plans
MOSCOW (Sputnik) – Former Greek Finance Minister Yanis Varoufakis acknowledged in a statement Monday that his office was devising a "Plan B" parallel payment system in the event of Athens exiting the eurozone.

On Sunday, the Kathimerini daily published excerpts from a recorded teleconference where Varoufakis allegedly disclosed details of an elaborate parallel payment system plan that involved hacking into government servers.

The former minister claimed in the July 16 conversation among hedge fund leaders that Prime Minister Alexis Tsipras gave him the "green light" a month ahead of the ruling Syriza party’s election victory in January.

Grexit Out of Question – EU Commission Head
The Working Group was headed by University of Texas economics professor James Galbraith, who confirmed having worked on the contingency plans from February through early July in a separate statement.

"The job was strictly to study the operational issues that would arise if Greece were forced to issue scrip [form of credit] or if it were forced out of the euro," Galbraith stressed.

Varoufakis noted that prior to acknowledging the Working Group’s existence, he was subjected to widespread criticism for failing to spell out a contingency plan.

"The Bank of Greece, the ECB, treasuries of EU member-states, banks, international organizations etc. had all drawn up such plans since 2012," the statement added.

Drachma? Never Heard of That - Kremlin Denies Greek Money Printing Idea
It lashed out at the Greek publication for erroneous interpretation of Varoufakis' words during the teleconference, contributing to "media-induced disinformation."

Varoufakis’ alleged "Plan B," to be enacted upon ECB-driven bank closures or a so-called Grexit, included setting up secret reserve accounts attached to every tax file number. The "Plan B" team would subsequently hack into the Finance Ministry servers and install a parallel payment system onto the General Secretariat of Public Revenues computers.