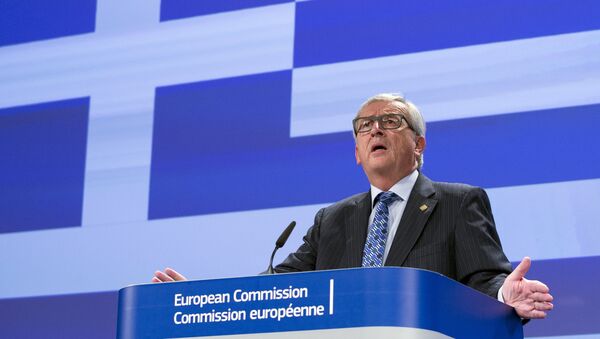 "It's my assumption that a Grexit is now definitely out of the question," Juncker told the Austrian Oe1 Radio.

Bailout Deal to Worsen Crisis in Greece - Former Energy Minister
Earlier today, the Greek parliament approved a second set of reforms, required by the creditors as a precondition for a rescue loan. The first package was passed July 15.

Juncker stated that the success of the new bailout talks depends mostly on Greek efforts, stressing that if Athens fully delivered on the terms of the freshly-agreed third bailout package, a "lull" could be expected.

The Joy of Submission: Europe Follows Germany Only When Berlin is Wrong

Last month, the Greek government rejected a bailout deal proposed by its lenders, later announcing a referendum on the issue. The Eurogroup expressed disappointment at the move, which triggered speculation about Greece's possible exit from the Eurozone.

Greece, severely affected by bad loan terms and the aftereffects of the 2009 economic crisis, has received about $270 billion from its main lenders — the Eurozone nations, the International Monetary Fund (IMF) and the European Central Bank (ECB) under two bailout programs.

Last week, the European Commission gave Athens a short-term bridge loan worth some 7 billion euro ($7.6 billion), which Greece used on Monday to make payments to the ECB and the IMF.