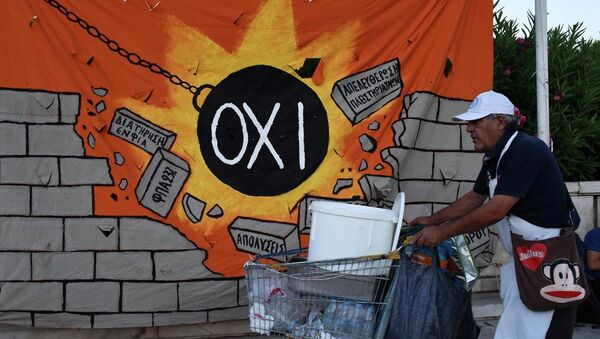 © AP Photo / Giannis Papanikos
Subscribe
International
India
Africa
Negotiations are due to get underway Tuesday over a $95 billion third bailout for debt-stricken Greece as reports emerged that the left-wing Syriza government is actively considering setting up a parallel currency ready for a return to the drachma.

Crucial talks over the bailout were due to have started last Friday, but a number of factors — neither diplomatic nor logistical — meant that they have been delayed. The three creditors — the International Monetary Fund (IMF), the European Central Bank (ECB) and the Eurozone countries will meet to discuss the latest bailout plan, which has required emergency legislation in Athens, as swell as a series of even worse austerity measures than the Greeks rejected in the referendum.

The Greek Government is meeting Monday to discuss the latest plan, as it emerged that former finance minister Yanis Varoufakis called a telephone conference on 16 July, during which he said that he had hired an IT expert to set up a parallel banking system.

So, I was going to "hijack" Greek citizens' tax file numbers? Impressed by my defamers' imagination. http://t.co/NmkhY0RQKO

According to the Greek newspaper Kathimerini, he told investors that he had hired an IT expert to hack into the General Secretariat for Public Revenues in order to get the information needed to set up the system:

"The prime minister, before we won the election in January, had given me the green light to come up with a Plan B. And I assembled a very able team, a small team as it had to be because that had to be kept completely under wraps for obvious reasons."

Senior figures within the Syriza party have said the third bailout plan will prove unworkable and that Greece should prepare for a possible fourth bailout and a return to the drachma. The IMF has said the current bailout terms are "unsustainable".

What do the Greece and Iran deals have in common? http://t.co/IhX3NWRv1B pic.twitter.com/FyWdaOOOiO

Even the European Commission has raised doubts about the plan. In a statement, it said: "These past six months of stop-go negotiations have been a period of growing distrust on the part of many European governments vis-à-vis the Greek government. And in several countries, national parliaments need to agree to provide new assistance for Greece.

"They [several countries] want explanations for why after two financial assistance programs, five years of close monitoring, and over $515 billion in assistance, we are again asking for European solidarity for Greece. Some of these countries have themselves made very significant efforts to get their economies back on track. Some are less wealthy than Greece. All want to be able to know whether this time it's different."

As preparations begin for the talks on Tuesday, there is no guarantee the Greek Government can implement the package, without serious civil unrest.