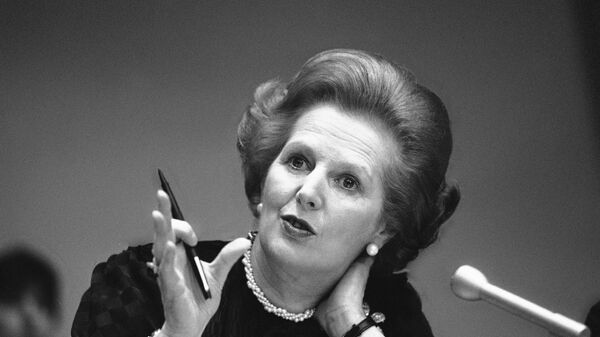 Top-secret Downing Street memos released by the National Archives have revealed how Thatcher was keen to support rebel groups fighting against the regime of Mengistu Haile Mariam.

On top of pushing for support of the rebels, the former PM also spoke of plans to reduce certain types of aid relief offered to Ethiopia during its battle with the horrific famine of the early 80s, which claimed the lives of one million people and inspired the Band Aid and Live Aid concerts.

The documents revealed that Ms Thatcher was becoming increasingly concerned with the human rights abuses of the Mengistu government, arguing that it was wrong to "jog along" with the regime and called on the foreign office to come up with alternative plans.

In particular, there were concerns over the distribution of food to many areas inhabited by rebel groups.

Despite a global push to give aid to the people of Ethiopia, suffering from the effects of the famine, the British government was considering pulling out some of its services.

Thatcher Concerned Over Lack of Influence in Ethiopia

In what is seen as a potentially hidden motive behind the UK's aid pledges, the documents reveal that Thatcher was also becoming frustrated at the lack of geopolitical influence Britain was able to exert over Ethiopia, despite contributing significant amounts to famine relief funds.

"Is it not inherently wrong to pour tens of millions of pounds of aid into a country and yet conclude that we have no serious scope for influencing its particularly cruel and objectionable government?"

Perhaps even more concerning about Thatcher's lack of concern for the sovereignty of Ethiopia, the documents — compiled by private secretary Charles Powell — even called on foreign office officials to come up with ways to "put the Ethiopians under pressure and even destabilize them."

"The Prime Minister continues to believe that it is not enough just to jog along in our relations with the distasteful regime in Ethiopia," Mr Powell wrote.

"If the conclusion is that our present relations offer no positive scope for exercising beneficial and positive influence, she [the Prime Minister] would like serious thought given to how we can make life harder for the Ethiopian regime."

While the Foreign Office knocked back the former PM's suggestions to support rebel groups opposed to the Ethiopian regime, it has highlighted the pragmatic motives of Ms Thatcher at the time, while also drawing comparisons to the UK and the West's current policy in Syria.

PM Thatcher insisted that food be dropped from planes into Ethiopia, but no additional funding was actually provided #CityFranks

The UK, along with the US and other western powers have engaged in similar destabilizing efforts against Bashar al-Assad's regime in Syria, through the support and training of various "moderate" Islamist rebel groups in the fight against Islamic State (ISIL).

While the "moderate" rebels are taking on ISIL fighters, they are also locked in a deadly three-way war with Syrian government forces, which has further exacerbated the country's devastating four-year civil war.

Instead of backing rebels groups, other countries such as Russia have argued that support should be given to Bashar al-Assad's legitimate government to help bring the conflict to an end and ensure some form of stability in the country.

However, the West has refused to deal the Assad government, claiming that Syrian forces used chemical weapons on some of their own citizens during the civil war.

There are serious concerns that the western policy may eventually backfire, with the splintering of the conflict worsening Syria's horrific humanitarian crisis, which has already seen four million Syrians flee the country, while a further 7.5 million have been displaced internally.

Meanwhile, other critics have argued that arming and training Islamist rebel groups is particularly dangerous, with the fear these fighters may join jihadist groups such as ISIL, or create their own terror forces.