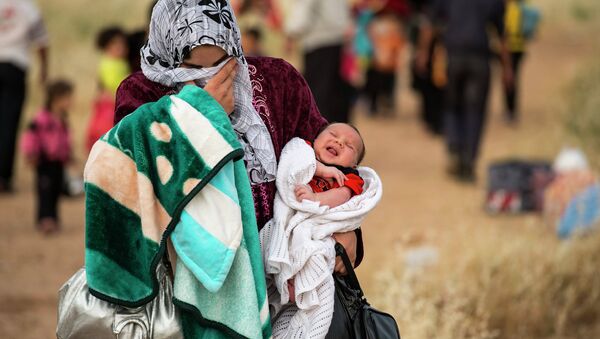 Finian Cunningham
All materials
When you are part of the problem then, by definition, you can't be part of the solution. That aphorism applies to the way European Union leaders are responding to the refugee crisis in the Mediterranean.

After their "emergency summit" in Brussels this week, the leaders of the 28-nation bloc stand accused by many humanitarian groups of abysmal failure.

Despite much official handwringing and talk about "saving lives" and "solidarity", in the end the European governments have shown that they are incapable of fully addressing the crisis to stop the spiralling death toll.

Mogherini Urges EU to Protect Refugees Amid Migrant Boat Disasters
The EU summit was called after some 1,200 migrants drowned over the past week when their overcrowded vessels sank in the Mediterranean. In one incident, more than 800 people died when the 20-metre fishing trawler they were packed into capsized.

This year is set to become the deadliest for fatalities in the Mediterranean. The Geneva-based International Organisation for Migration says that at the current rate, some 30,000 people will perish by the end of the year — 10 times the figure for 2014, which itself was an appalling record high.

Shamefully, the inadequate response of European governments to the crisis will most likely see that grim predicted death toll materialise. This is because the EU is treating the problem as a security issue.

After the leaders' summit in Brussels one of the main points of agreement is to beef up maritime border controls. The so-called Triton Operation is to have a three-fold increase in its current budget and EU member states are pledging to supply more patrol boats and helicopters.

British leader David Cameron has even said his country would send a Royal Navy warship to the Mediterranean, while Germany has proposed the deployment of military marines.

Official 2014 Refugee Figures to Hit All-Time High - UNHCR
European governments are thus battening down the hatches of "Fortress Europe" to make sure that migrants don't reach their shores. But this security response won't stop people piling into boats on the North African coast in the first place and making the treacherous sea crossing towards mainland Europe.

Some EU leaders, such as Commissioner for Migration Dimitris Avramopoulos, are calling for military action against human smugglers — the gangs that prey on migrants and exploit them for passage to Europe, often in dangerous and overcrowded vessels.

"We are declaring war on human traffickers," said Avramopoulous.

The supposed plan is that EU military forces will destroy the boats used by these trafficking gangs. Italy's interior minister Angelino Alfano has even proposed bombing vessels moored off North Africa that are suspected of being involved in "modern slavery".

Apart from serious implications for international law and the sovereignty of North African countries, the notion of blowing smuggler-ships out of the water as a solution to the humanitarian crisis in the Mediterranean is another example of how European leaders are incapable of properly addressing the issue. Indeed, such idiotic proposals will only make the dire situation worse.

Migration Commissioner Urges EU to Deal With 'Unprecedented' Refugee Influx
With millions of people willing to risk their lives by migrating across Asia, the Middle East and Africa in order to make it to Europe, no amount of border security or "preemptive strikes" will address the problem. Europe's security response is merely dealing with effects, not the causes of migration.

Therefore, the waves of desperate migrants will continue to propagate towards Europe. Europe may not let them in, but what we will be then facing is the catastrophic and morally repugnant situation of the Mediterranean polluted by thousands of decaying corpses.

There are several causes for the current epic flow of migrants: poverty, hunger, unemployment and climate change in the originating countries are some of the reasons.

The EU could address these issues by, for example, increasing humanitarian aid budgets instead of splurging billions of euro on military spending as part of its US-NATO alliance. EU countries could cancel trillions of euro in debt owed to European banks by countries in Africa. That would then allow those countries to develop resources for their people instead of them being forced to migrate to find employment in Europe.

But here is the real factor: conflict. Most of the people migrating to North Africa and thence to Europe are fleeing war and conflict. The UN High Commission for Refugees records that among the millions of would-be migrants the preponderant nationalities are Syrian, Iraqi and Afghani. Among the African migrants, many too have come from countries torn apart by violence.

Now we ask: who has caused these wars and conflicts? It should be obvious, but amazingly, the Western media do not permit the explicit identification of the countries that are responsible for most of the conflicts.

Leaked EU Draft Shows Majority of Undocumented Migrants to Be Sent Home
The culprits are primarily Washington and its European allies.

Washington and London together destroyed Afghanistan and Iraq, forcing millions of displaced during more than a decade of illegal war and occupation. A despicable legacy that continues to this day.

Washington, London and Paris, along with other European NATO members, destroyed Libya with a seven-month aerial blitzkrieg during 2011. That criminal carnival of mass murder overthrew the government of Muammar Gaddafi and replaced it with a failed state of ongoing internecine violence. That is why lawless Libya is now the launchpad for millions of migrants being trafficked to Europe. The US and the EU created that gateway of misery.

What the European governments did in Libya, along with their American ally, is nothing short of a war crime. These governments should be prosecuted in an international tribunal based on Nuremberg principles.

As Predicted: Overthrow of Qaddafi Led to Horrific Migrant Crisis in Europe
The same goes for Syria where the Americans and Europeans, together with their Israeli and Arab proxies, have been waging a covert war of regime change for the past four years. Washington, London and Paris in particular, have turned Syria into a charnel house with their extremist Takfiri mercenary brigades. Up to 10 million Syrians — nearly half the population — have been displaced and exiled as wandering refugees.

In Africa, the US and its NATO allies have militarised that continent in a new "Scramble for Africa" to offset legitimate Chinese strategic interests. NATO is expanding on the Horn of Africa with drone bases in Djibouti, Kenya, Ethiopia and attacks in Somalia. President Obama has sent special forces into several Central and West Africa countries, while France has embarked on outright illegal military interventions in Mali, Central Africa Republic and the Ivory Coast. This American and European militarism across Africa is sowing conflicts and resulting in millions of displaced people whose communities and farms have been devastated.

Right now on the Arab Peninsula, Yemen is being pounded by hundreds of warplanes belonging to Saudi Arabia and the other Gulf Arab dictatorships. These warplanes are supplied and coordinated by Washington. Europe may not be directly involved in this particular slaughter, but its shameful silence in international fora, such as the UN Security Council, nevertheless make it complicit in the aggression on this sovereign nation.

Tragically, Yemen — the Middle East's poorest country — will add tens of thousands more desperate people migrating towards Libya and joining the droves of other Asians and Africans trying to escape to Europe.

Some estimates put the total number of refugees on the move across Asia, the Middle East and Africa at over 50 million, which is said to be biggest collective movement of people since the Second World War.

The bottom line is that this humanitarian cataclysm is "a stain on Europe's conscience". Not merely because dead bodies are floating in the Mediterranean — "the image of which is against European values" said German Chancellor Angela Merkel. It sounds like Merkel is more aggrieved by the image, rather than the fact of dead bodies.

PACE Blames ISIL for Worsening Situation of Syrian, Iraqi Refugees
No, the appalling death toll among millions of migrants dying at sea and on land is a stain on Europe's conscience because this problem has been largely caused by Europe, from its warmongering and militarism in collusion with Washington.

European leaders cannot offer a solution to the refugee crisis because they are part of the problem. All that the EU, under the present leadership, can "offer" is more ways to make the problem even worse.

Stopping European-fuelled wars and conflict in Asia, the Middle East and Africa is a big part of the solution. So too is for the people of Europe to get rid of their current crop of governments and replace them with actually democratically serving ones.