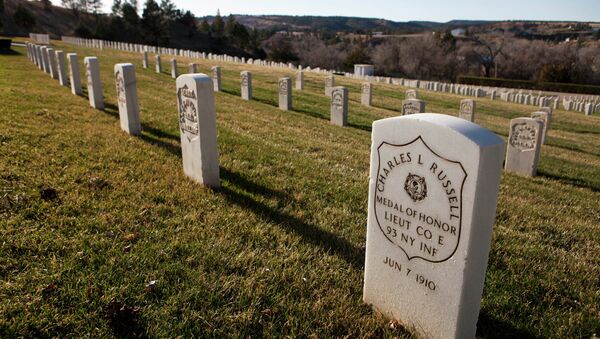 About one third of US veterans in the Department of Veteran Affairs’ (VA) backlog have died waiting for healthcare under the current insurance program format, a leaked VA document obtained by The Huffington Post revealed Tuesday.

US Affordable Healthcare Act Drives Uninsured Rate to Lowest Ever - Obama
MOSCOW (Sputnik) — According to the leak, about 239,000 of 847,000 US veterans applied for health care, but never received it.

"VA wants you to believe, by virtue of people being able to get health care elsewhere, it's not a big deal. But the VA is turning away tens of thousands of veterans eligible for health care," Scott Davis, a program specialist at the VA's Health Eligibility Center, who revealed the document, told the newspaper.

The document stressed that the final death record was relevant for 2015; however, some of the applicants may have died years ago, as the VA has no mechanism to purge its list of deceased applicants.

City Threatens US Military Veteran With Arrest For Living ‘Off the Grid’
Davis sent copies of the report to the House of Representatives and Senate committees that oversaw the VA, and to the White House, hoping to stir up authorities, the newspaper said.

Earlier this year, CBS News revealed there were about 14,000 people at the VA in 2014 who were "begging for help," despite the agency operating the nation's largest integrated healthcare system.

Recently, a $3-billion hole was found in the VA budget. Department and congressional officials said they would try to offer a clean budget plan by the end of July.