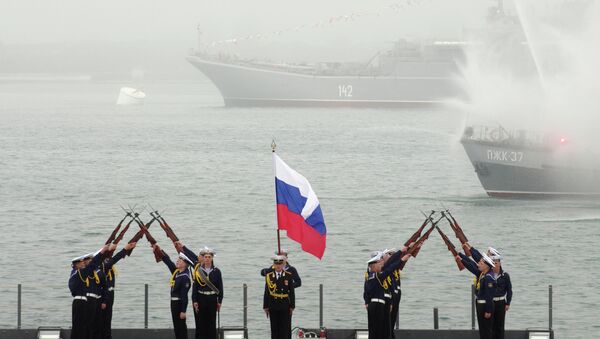 © Sputnik / Vasiliy Batanov
/
Go to the photo bank
Subscribe
By imposing economic sanctions on Crimea, the West and the Ukrainian government will only alienate the population of the peninsula, pushing it deeper into the warm embrace of Russia, British journalist Thomas Patrick Lowndes de Waal believes.

Even Detractors Admit That Crimean Question is Off the Table – Lavrov
Crimeans have long been known for their courage and fortitude: the peninsula saw two brutal sieges — in the Crimean War (1854-55) and in World War II, British journalist Thomas de Waal, a senior associate in the Russia and Eurasia Program at the Carnegie Endowment for International Peace, underscores, adding that now Crimea is facing its third blockade.

The United States and European Union have imposed the world's toughest economic embargo on Crimea which is in fact more severe than anti-Russian sanctions.

"Almost all trade, transport links, and banking transactions have been blocked… It is comparable to those imposed on Cuba, Iran, or Sudan, but unique in being applied to a single province of a country rather than a state," de Waal underscored.

Anti-Russia Sanctions Imposed Over Crimea Reunification to Remain Forever
In its turn the Ukrainian government has also taken a series of harsh punitive measures toward its lost province, "cutting off some transportation links, water, and power," the journalist emphasized.

Remarkably, in March 2015, US Senators John McCain and Chris Murphy told Sputnik that they are determined to continue the economic blockade of Crimea until it becomes "part of Ukraine."

Meanwhile, on June 19, EU governments extended a ban on trade and investment with Crimea for a year.

Such a policy, however, will only exacerbate the situation, de Waal believes.

"The economic siege looks likely to make the plight of Crimeans more miserable. The danger for the Kiev government and its Western friends is that it may also make them more hostile to Ukraine and dependent on Russia. A point will have been proved, but Crimea may be lost," the British journalist highlighted.

US Senator Urges to 'Meet With Force' Crimean Reunification With Russia
However, the Russian government has contributed significantly to the region's economic stabilization, bringing Crimeans' pensions and salaries up to the Russian average ("appreciably higher than in Ukraine").

So far, the "overall effect" of joint Western-Ukrainian efforts to isolate Crimea "is that locals now pin their hopes on Moscow," de Waal noted.

Furthermore, Crimeans consider the planned construction of a bridge across the Kerch Strait an effective solution of its current problems.

Crimean Prosecutor Poklonskaya Thanks West for Sanctions
But Kiev is only adding fuel to the fire: the Ukrainian government has eventually taken the way of "complete isolation," labeling the Crimean peninsula as "occupied territory." A new draft law proposes a total blockade of Crimea and the two eastern breakaway republics — Donetsk People's Republic and Lugansk People's Republic.

The journalist pointed to the fact that Ukrainian authorities have obviously adopted the unsuccessful tactic of former Georgian president Mikheil Saakashvili, who is now serving in the Ukrainian government.

After his 2008 conflict with Russia Saakashvili imposed a blockade on Abkhazia and South Ossetia but gained nothing.

"[T]hat tactic has failed in Georgia, only pushing Abkhazia and South Ossetia deeper into Russia's embrace," de Waal remarked, adding that both regions have been finally integrated into the Russian economy.

It is worth mentioning that Crimea's General Prosecutor Natalia Poklonskaya has recently noted that the West has against its own will facilitated the region's development through the sanctions policy, adding that the situation in Crimea is stable.