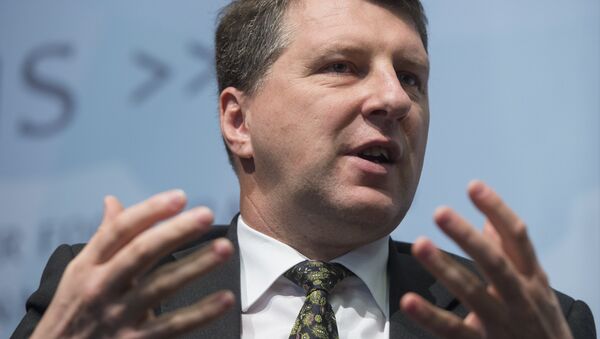 In an interview for news hub Delfi.lv, new Latvian President Raimonds Vejonis, who was appointed to the post by the country's parliament earlier this week, stated that his country has made many mistakes regarding the integration of its Russian minority over the past two decades, adding that he will do his best to look for sources of common ground.

Amid NATO War Drums, Latvian President Urges Better Ties With Russia
Since 1992, Latvian law has had a special category of residents, mostly comprised of ethnic Russians, Belarusians and Ukrainians, who do not have Latvian citizenship, and who have been issued a 'non-citizen passport'. Consisting of over 262,000 persons, or about 12 percent of the country's population (down from 400,000 people and 18 percent of the population in 2006), this group consists of ethnic non-Latvians and non-Livonians whose families migrated to the area after 1940, and who did not complete their education with Latvian as the primary language of instruction. The group cannot vote, cannot hold certain positions in civil service and government, and have limited pension rights. The UN, together with international rights organizations, has repeatedly described the Latvian government's position as discriminatory and xenophobic.

Asked to comment on the country's integration policy toward its Russian-speaking minority, Vejonis, whose mother is of Russian origin, stated that "sometimes it's difficult to say whether Latvia has even had a real integration policy. I think we have made many mistakes over the years. We did not use the possibilities of a single information space over the years of independence, and as a result, two [separate] information flows have resulted –one in Latvian and one in Russian. We did not use all the existing opportunities to teach non-Native Latvian speakers the language; we couldn't be bothered to find the money for language lessons of the state language for our own residents."

Moreover, Vejonis noted that the country's "political system is arranged in the wrong way. Our parties are divided [by nationality], being pro-Latvian and pro-Russian, which is not the tradition in normal developed societies, where the division lies between left and right political views. Our Russian parties are only for Russians, the Latvian ones, only for Latvians. This is not right. And so on the whole we have made many mistakes."

Asked what he would do to ameliorate the situation, Vejonis noted that "of course, after 25 years of mistakes, it is very difficult to change everything in a few years as president. However, I believe that we must seek a common ground, shared by all inhabitants of Latvia, for example in the fields of culture and sports, and thus create a common platform on which our views can be joined. And in general, not to divide people by nationality –everyone who lives here is part of Latvia."

SuperPutin Conquers Latvia…In a Very Peaceful Way
"We have only ourselves to blame for failing to explain to the country's residents in plain language the points on which our views diverge, where there is controversy. Why is there such a strong reaction against the Legionnaires [Latvia's Waffen-SS volunteer unit during the Second World War]? Maybe because we do not analyze how this situation came about? And how did it turn out that some also fought for the Soviet Army? Everything must be explained."

Asked about parliamentary proposals for reforms in education which would eliminate Russian as a language of instruction, the president noted that this would not be possible in the near future, not least because there is in insufficient cadre of teachers who know Latvian.

As for the teaching of Russian as a foreign language, Vejonis brought forth his personal experiences with his own sons, noting that if at one time Russian was considered a language ethnic Latvians did not want to learn, with young people choosing English and German instead, "today I see that the situation in schools is changing, and young people are increasingly choosing Russian. After all, we are neighbors and remain connected by economic ties."

Asked to comment on Latvia's foreign and defense policy as it relates to Russia, Vejonis, who previously served as the country's defense minister, told Delfi that "no one ever said that Russia is preparing to attack someone or take someone over. In any case, we are all interested in good relations with our neighbors, including Russia. But at the moment, these relations are probably not being developed as well as they could be. They are more strained."

Baltic States Must Maintain Peaceful Coexistence With Russia – Lawmaker
Vejonis attributed the strain to what he called Russia's "unpredictability" and "aggressiveness" in its response to the Ukraine crisis last year. Still, the president effectively agreed with the position currently being held by Moscow over the ongoing conflict in Ukraine, noting that dialogue and a true normalization of relations will depend on the fulfillment of the Minsk agreements.

Vejonis, narrowly chosen by the country's parliament to replace outgoing president Andris Berzins, became the country's sixth president since independence, and the first Green Party president in the European Union. An environmental engineer by training, Vejonis was first appointed Environment Minister in 2002 in the government of reformist Prime Minister Einars Repse. He was later elected to the country's parliament as part of the Greens and Farmers Alliance in 2006. In January 2014, he was appointed defense minister by Prime Minister Laimdota Straujuma. Considered a moderate in comparison to his predecessor, Artis Pabriks, during his time as defense minister Vejonis vacillated between claiming that Russia was Latvia's "foe" and stating that Moscow does not pose a threat to the security of the Baltic states.