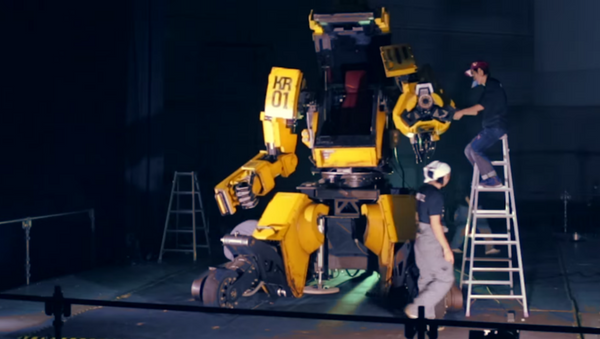 After being challenged by an American company to a giant robot duel, Japan has accepted. The robotic equivalent of gloves will soon come off.

MegaBot’s creation is the 12,000-pound Mark II, a mechanized fighting machine which wouldn’t look out of place in the climax of "Avatar."

"Because we’re American," the creators say, "we’ve added really big guns," which can fire three-pound paintballs at over 100 mph.

MegaBots wants to put the Mark II in the ring with world’s only other mega-combat bot, the Kuratas, made by Japanese company Suidobashi.

"Prepare yourselves and name the battlefield," the challenge states. "In one year, we fight."

"It’s interesting, I’ll give them that," Suidobashi CEO Kogoro Kurata said in response to the challenge. "But my reaction? Come on guys, make it cooler."

“Just building something huge and sticking guns on it. It’s…super American,” he added.

If MegaBot agrees to the new terms, you may want to go ahead and reserve seats. Think monster truck rally meets "Pacific Rim," and with the Kuratas robot costing upwards of 135 million yen, the stakes will be high.

Suidobashi’s bot is controlled by a single pilot, but the Megabot requires two controllers tucked precariously inside the death machine. Those pilots will need to be drift compatible, to say the least.