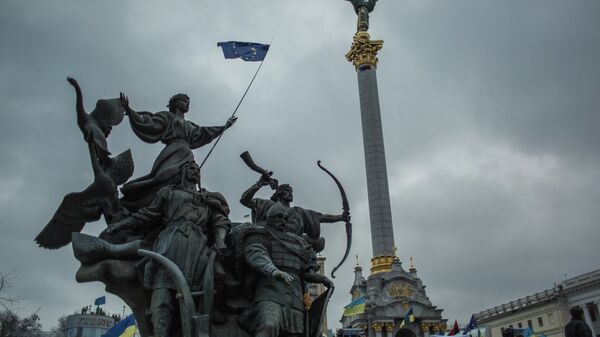 © Sputnik / Andrey Stenin
/
Go to the mediabank
Subscribe
International
India
Africa
The European Union is seeking to become an empire as the United States by trying to create its own sphere of influence in Eastern Europe, lawyer and political analyst Andreas Wehr told Sputnik.

"This area of influence is in the East, in Ukraine and Belarus and one day it may also be related to the Caucasus," the German expert told Sputnik.

According to the analyst, the EU is interested in Ukraine's economic potential, as well as in the country's transit routes for Russian gas supplies, which Brussels aims to control once. Europe is trying to reduce Russia's role in the region to expand the area of its influence.

The assertiveness which the EU demonstrates with regard to Ukraine has one more goal — to prevent the United States from strengthening its position in the region.

While Brussels and Washington are linked by a long-standing cooperation that will only intensify after the Transatlantic Trade and Investment Partnership (TTIP) is established, both the EU and the US are not only allies, but rivals.

Creation of EU Army Would 'Liberate Europe From US and NATO'
There is no unity among the EU members concerning the US' "aggressive" stance on Ukraine, Wehr noted.

On the one hand, Poland and the Baltic states traditionally support Washington's stance, while on the other hand, Italy, Hungary, Slovakia and the Czech Republic are skeptical about American policy. Germany and France, in their turn, are trying to find a balance between these contradicting positions.

The US is essentially trying to solve the entire world's conflicts by military means, while the EU does not have its own armed forces and it makes Europe especially dependent on Washington, the expert said. "In this case, the European Union's dependence on the United States is fatal."

Commenting on the Brussels' ties with Moscow, Wehr said that their improvement is in the interests of both sides. The key condition for a thaw in EU-Russian relations is the recognition of Russia's legitimate interests, including those related to Ukraine, by Germany's political and public elites.

German Businesses Oppose EU Anti-Russian Sanctions at Petersburg Forum
Different parties in Germany may be interested in improving relations with Russia, Wehr noted. Berlin should take into account the impact of losing the Russian market, he said.

Wehr cites the example of the relations that existed between the USSR and Germany and believes that the "understanding of Russians" policy could contribute to achieving the balance.

"When the Soviet Union still existed, Germany assumed that it had to respect the interests of a nearby superpower. I am convinced that today it is possible to revive this "understanding of Russians" which had been so widespread at that time to create a balancing factor in the public debate."