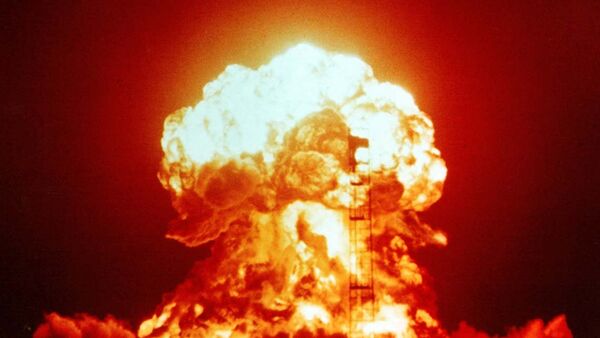 The Russian newspaper ‘Komsomolskaya Pravda’ decided to conduct an impromptu poll in response to a survey in which Americans signed a petition to nuke Russia.

Russians residing in the city of Alushta in Crimea refused to sign a petition for a conditional pre-emptive nuclear strike on the United States.

The Russian newspaper ‘Komsomolskaya Pravda’ decided to conduct an impromptu poll in response to a similar survey conducted by an American blogger in San Diego.

American journalist Mark Dice decided to conduct a poll asking Americans to sign a petition to preemptively nuke Russia. The journalist, who is the best-selling author of ‘Inside the Illuminati’ and frequent guest on History Channel’s ‘Ancient Aliens’, conducted the poll on the beaches of Southern California.

He told people that if they sign, they show support of an alleged plan by US President Barack Obama on a preemptive nuclear strike on Russia.

He assured them that ‘this is the only way to maintain the supremacy of the United States.’ Most of the passers-by ended up signing the petition. In a comment to the video Marc Dice noted that the results are ‘worrisome.’

The goal: to see how many beachgoers would sign a petition to preemptively nuke Russia.

Americans Sign Petition to Preemptively Nuke Russia
"All right, I’ll sign it for you," one man responds.

"Sure, no problem," another woman responds.

On the contrary, the poll conducted in Russia gave the opposite result. As told by the newspaper, amongst the three dozen people who were asked to sign a petition to nuke America, only two agreed to sign a conditional petition and did so with uncertainty.

"Can we just shower them with the sanctioned potatoes in response,” one pensioner jokingly suggested.

"Russians do not abandon Russians and do not attack others. We do not fool around, like America,” said the woman.