It’s Not Just Troops: US Plans to Open New Military Base in Iraq 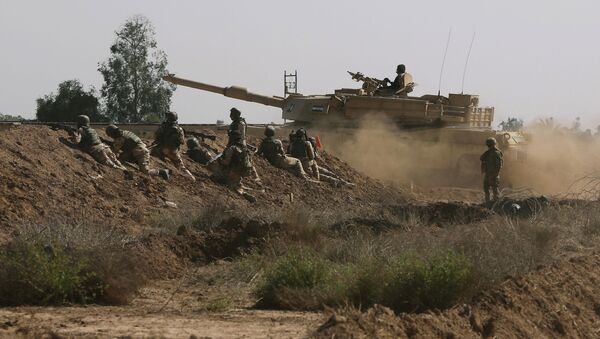 © AP Photo / Karim Kadim
Subscribe
International
India
Africa
While insisting it does not represent a shift in his overall strategy, President Obama has ordered the deployment of 450 US troops back into Iraq to help counter the Islamic State terrorist group. Given that all those troops are going to need a place to stay, the US will also construct a new base in a country it’s supposed to be withdrawing from.

Barack Obama ran both of his presidential campaigns on a promise to wind down America’s foreign wars. Even as the self-proclaimed Islamic State terrorist group has taken advantage of the power vacuum left by the US invasion, gaining large swaths of Iraq and Syria, Obama has remained steadfast: No boots on the ground.

"As your commander in chief, I will not commit you and the rest of our armed forces to fighting another ground war in Iraq," the president said last September.

That pledge has come with a few caveats. For one, while the US has been adamantly against ground combat missions, it has targeted Islamic State militants with strategic airstrikes.

Secondly, the Pentagon has retained a large troop presence in Iraq, though only for training and advising Iraqi forces. Currently, the United States has 3,000 military personnel spread across four separate training sites.

As early as this summer, the White House could be sending an additional 450 troops into Iraq, seemingly reversing President Obama’s regional strategy. Cementing a prolonged US presence even further is the fact that those new troops will be stationed at a new training facility to be built in Anbar province.

"These new advisers will work to build capacity of Iraqi forces, including local tribal fighters, to improve their ability to plan, lead and conduct operations against ISIL in the eastern Anbar under the command of the prime minister," White House press secretary Josh Earnest said in a statement on Wednesday.

The new base will be constructed at the Iraqi military base, Taqaddum. US officials hope that the facility’s location in eastern Anbar will provide troops with a unique ability to reach out to Sunni tribes in the area, potentially recruiting them in the Shiite-majority Iraqi Army.

"The Sunnis want to be part of the fight," a senior US official told the New York Times. "This will help empower them, creating more recruits and more units to fight ISIL."

In addition to the training operation, the White House will also hasten the delivery of a new weapons stockpile to both the Iraqi Army and tribal fighters struggling against the Islamic State. Because the administration has resisted arming Sunni tribes in the past, it claims it is sticking to that policy by only shipping arms directly to the Iraqi Army, which will then, ideally, enlist Sunni fighters.

In this way, the White House can deny it has directly armed tribal forces.

Obama said that his decision follows a request from Iraqi Prime Minister Haider al-Abadi during the G7 summit in Germany earlier this week. With US help, the Iraqi government hopes to assemble a force of 10,000 to retake the city of Ramadi from Islamic State militants. From there, coalition forces would stand a better chance of retaking Mosul, the country’s second-largest city.

"This decision does not represent a change in mission, but rather adds another location for DOD to conduct similar activities in more areas in Iraq," the Department of Defense said in a statement, stressing the Obama administration’s insistence that the US will not be drawn into another ground war.

"This effort is in keeping with our overarching strategy to work with partners on the ground to degrade and ultimately defeat ISIL."

While the administration stresses that US troops will be far from the frontline, many US lawmakers have been pushing for the US to take a more active combat role. Arizona Senator John McCain has urged Obama to approve the use of spotters for calling in airstrikes, as well as helicopter gunships.

During a visit to Israel on Tuesday, General Martin Dempsey, Chairman of the Joint Chiefs of Staff, noted that the new US base signifies an expanded military footprint in the region. Time will tell how much more expansive that presence will become.