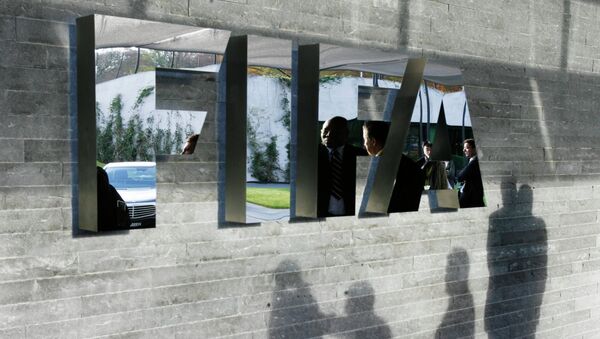 Finian Cunningham
All materials
The United States' criminal probe into alleged FIFA fraud has the unmistakable air of a witch-hunt. It's disproportionate and contrived.

The telling dearth of evidence to support high-flown corruption claims, the relatively small sums of money involved, and the hyped Western media-driven focus working hand-in-hand with US law-enforcement agencies are some of the salient signs that there is an ulterior political agenda at play.

That ulterior agenda has to do with Washington's bigger geopolitical objective of undermining Russia and the government of President Vladimir Putin. Putin has himself pointed to this vicarious objective in the FIFA fiasco.

But let's examine the nitty-gritty a bit more.

The official purpose of the US investigation — "cleaning up" international football — sounds unconvincing. What we need to look at here is the bigger picture of why this scandal at the World Cup organising body has suddenly exploded.

In a surprise announcement, Blatter was forced to eat humble pie by resigning as president of the international football federation — only four days after he was re-elected for the fifth time by the organisation's 209-member worldwide associations. He had headed the organisation for 17 years and was due to complete another four-year tenure.

The normally ebullient Blatter was visibly deflated in tendering his resignation. Last week, he had brushed off calls to quit, amid US-led allegations of corruption at the World Cup body. But then the 79-year-old chief executive turned around only days later and handed in his notice.

Why the sudden change of heart? After all, last week Blatter rebuffed the idea of standing down because, he said, that would be an admission of his own guilt in the corruption scandal at FIFA. So, why did Blatter bite the bullet? Is he perhaps indeed guilty of financial crimes? Or maybe at his delicate age, he just couldn't face the unnecessary stress and hassle?

Last week, the American authorities had requested Swiss police to arrest seven FIFA officials ahead of the federation's annual conference in Zurich. American indictments have been issued for seven other officials and sporting executives. Charges range from money laundering to racketeering, amounting to a total of $150 million spread over the past 24 years.

Following the FIFA boss's decision to quit this week, The New York Times reported: "Mr Blatter had for days tried to distance himself from the controversy, but several United States officials, speaking on the condition of anonymity, said that in their efforts to build a case against Mr Blatter, they were hoping to win the cooperation of some of the FIFA officials now under indictment and work their way up the organisation."

In other words, the US law enforcers were letting it be known through the media that they are going after Blatter, and it is probable that under building pressure the FIFA boss decided to throw the towel in, simply to avoid further media controversy. Hours after his stepping down, US media reported that Blatter is "now under investigation" by the American authorities. He has not been charged yet, and it is unlikely in any event that Blatter would be extradited to the US, because his Swiss nationality affords certain protection.

None of this is to substantiate that there is any legal case against Blatter. But the important point here is to note the contrived way that the US authorities and the American media worked toward the goal of hounding Blatter out of his position as president of FIFA. Another goal is the further blackening of the federation's reputation and all its decision-making — in particular the awarding of the 2018 World Cup venue to Russia.

It was the American news media that turned the FBI heat on to Blatter, without any evidence, and merely on the basis of anonymous "official"
briefings of unsubstantiated accusations.

As the New York Times reports on its own role: "Initially, much of the public focus of the investigation was on [American football confederation] Concacaf's role, and FIFA officials, including Blatter, portrayed the arrested officials as rogues. But The New York Times on Monday, based on information from several United States officials and others briefed on the case, linked Mr Blatter's top deputy, Jerome Valcke, to a series of payments that are believed [sic] to be bribes connected to South Africa's winning the vote that gave it the 2010 World Cup."

This smacks of a tawdry trial-by-media. The upshot is that the president of FIFA is effectively kicked out of his post and the entire voting procedure of the global organisation is overturned — simply on the back of "believed" allegations that have emanated from American law-enforcement authorities and broadcast through the mass media.

Out in a Blaze: US FIFA Official Admits Taking Bribes for World Cup Votes
In any case, what of the central allegation that a $10 million "bribe" was passed from South African authorities to FIFA in order to illicitly gain the right to host the 2010 World Cup. This is the alleged bribe that was linked to Jerome Valcke and his boss, Blatter, tipping the latter to quit.

South Africa sports minister Fikile Mbalula this week acknowledged that a sum of $10 million was donated by his country's football association, but that the transaction was carried out above-board and through regular bank transfers, not smuggled out in a briefcase, as the Americans and Western media have colourfully claimed. The South African transaction appears to have been a normal, common procedure, whereby financial aid is granted from one FIFA member confederation to another. In this case, the South Africans were making a "legacy donation" to the "African diaspora" in the Caribbean countries, which come under the Concacaf umbrella that also covers North and Central America.

The South African minister, speaking to international media, categorically rejected any suggestion that the grant was made to "buy" the privilege to hold the 2010 World Cup. In short, it was not a bribe.

What's more, the South African government disclosed that it has not been given any evidence or information by the American authorities over the alleged bribe. In fact, it seems that the Western media have been briefed more by the FBI than have the South African sovereign authorities even though the accusations have served to smear that country's global reputation. This lack of normal diplomatic protocol from the Americans toward their South African counterparts is indicative of a hidden agenda.

At the end of the day, Sepp Blatter has been bounced out of his FIFA post on the basis of "bribery" alleged anonymously by US officials, for which there actually seems to be a legitimate and entirely mundane explanation, according to the South African government.

The same lack of evidence applies to the headline figure of $150 million that US law enforcement claims FIFA officials have been illicitly linked to over a 24-year period. That pile of alleged ill-gotten loot breaks down to approximately $6.5 million a year.

Hold on a minute. Let's not be naive about this. A figure of $6.5 million a year in alleged financial fraud is peanuts, when compared with the billions and even trillions of dollars of criminality that Western-based banking corporations are accused of being involved in.

Follow the Money: Major US Banks at the Heart of FIFA Corruption Scandal
British bank HSBC, for example, was caught earlier this year, thanks to a company whistleblower, involved in massive criminality amounting to $180 billion in tax evasion and money-laundering for drug cartels.

JP Morgan and other Wall Street banks are suspected, with substantial evidence, of illegally rigging gold-price markets and foreign-currency exchanges in order to embezzle trillions of dollars from the wider public — for which the wider public then have to endure crippling austerity policies, while the banking executives become multi-millionaires.

Yet, not one of these "banksters" has ever been arraigned or charged, let alone prosecuted by the US and Western governments.

Therefore, in the scale of known financial crime by global banks and their executives, the wholly over-the-top dramatic focus of American and Swiss law-enforcement agencies on FIFA is patently ridiculous.

That brings us to the ultimate conclusion that the whole US-led witch-hunt against FIFA and its top officials must be directed for an ulterior purpose. The "explanation" of fighting corruption, as the American authorities and Western media claim, is obviously nonsensical.

In the wake of Blatter's resignation, the Western media are now moving the focus on to questioning the legitimacy of Russia as the 2018 World Cup venue. That tells us everything about what this whole US-driven storm in a teacup at FIFA is really aimed at.

The beautiful game and its billions of fans around the world are being manipulated into an anti-Russian agenda that serves Washington's geopolitical gaming against Vladimir Putin.

Up to now that gaming has been centred on the Western-fomented Ukrainian conflict. Unable to score desired points on that particular field, due in part to the incompetence of the Neo-Nazi regime in Kiev, the US seems to have decided to try another "venue" for its gaming to destabilise Russia — and conveniently a witch-hunt at FIFA is a handy substitute.