Out in a Blaze: US FIFA Official Admits Taking Bribes for World Cup Votes 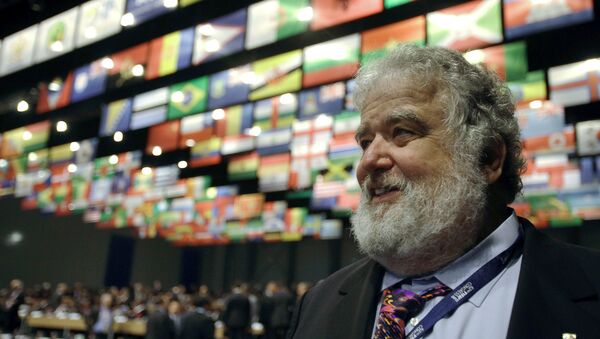 Former FIFA official Chuck Blazer has admitted to taking bribes in connection with the French and South African World Cups.

The admission came during a court hearing in New York, when Blazer said that he and others on the organization's executive committee accepted bribes in exchange for choosing South Africa as the host of the 2010 World Cup.

"I agreed with other persons in or around 1992 to facilitate the acceptance of a bribe in conjunction with the selection of the host nation for the 1998 World Cup," Blazer said in a court transcript unsealed by prosecutors on Wednesday. Blazer has pleaded guilty to racketeering.

"I and others on the FIFA executive committee agreed to accept bribes in conjunction with the selection of South Africa as the host nation for the 2010 World Cup."

Earlier on Wednesday, South Africa's sports minister Fikile Mbalula reiterated that it had played no part in bribing FIFA officials.

Blazer's allegations are what led to the criminal case which led to the indictments of several high-ranking FIFA officials last week, after the FBI offered him a plea deal, according to the LA Times. The scandal has led to the resignation of President Sepp Blatter, after only recently being reelected for his fifth term.

The US Justice Department alleges that FIFA officials received bribes totalling $150 million over a span of 24 years.

Some have questioned the timing of the arrests, suggesting that the United States was deliberately trying to prevent Blatter's reelection. Others have also pointed out that the arrest of officials on Swiss soil falls outside the jurisdiction of the Justice Department, and is a sign of US meddling for political gain.

"There are signs that do not lie: the Americans were candidates for the World Cup 2022 and they lost," Blatter told the Swiss RTS television channel after his reelection.