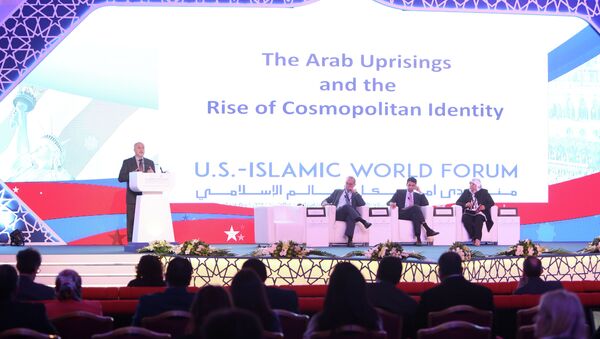 The West needs to continue supporting countries in the Middle East in order to ensure stability in the region, according to experts who participate in the annual US-Islamic World Forum in Doha.

US Created Islamic State to Redraw Map of the Middle East – Iranian General
WASHINGTON (Sputnik) — The West needs to continue supporting countries in the Middle East in order to ensure stability in the region, experts said during the annual US-Islamic World Forum in Doha, Qatar on Tuesday.

"My main concern is concentrated in one word 'disintegration.' Every excuse is being used to lead to disintegration of many of the Middle East states,” Former Minister and Ambassador of Bahrain Ali Fakhro said.

Fakhro warned that “elements from the outside and from inside” are using every pretext to disintegrate nations, including in Iraq, Syria, Lebanon and Saudi Arabia, and stressed that the West needs to discourage those who are trying to disintegrate the Middle East

US-Led Coalition Losing Fight Against Islamic State - Poll
"My word to the Western authorities is please…do not help for this disintegration to happen because you will be opening Pandora’s box which you will never be able to close in the future,” Fakhro said.

The forum comes as turmoil in Syria, Iraq, Yemen and Libya is reshaping the geopolitics of the Middle East, and at a time when a final deal between the international community and Iran over Tehran’s nuclear program approaches the end of June deadline.

Senior Fellow at the Hudson Institute Michael Doran agreed with Fakhro, and expressed concern about the “abandonment of the traditional US role in the region, and the bad affect that has.”

“It is the job of the United States to organize this region and to come up with a concept of political order that can bring stability to the region,” Doran stressed during the forum.

Doran warned that the countries in the Middle East, “left to their own with an American withdrawal, will not come together and create that order, in fact the opposite will happen."

On May 14, US President Barack Obama met with Gulf Cooperation Council (GCC) leaders from Bahrain, Kuwait, Oman, Qatar, Saudi Arabia and the United Arab Emirates and offered the US assistance. During the meeting, Obama agreed to assist GCC states in areas of developing a region-wide ballistic missile defense capability as well as to defend Gulf Arab states in the face of external threats.