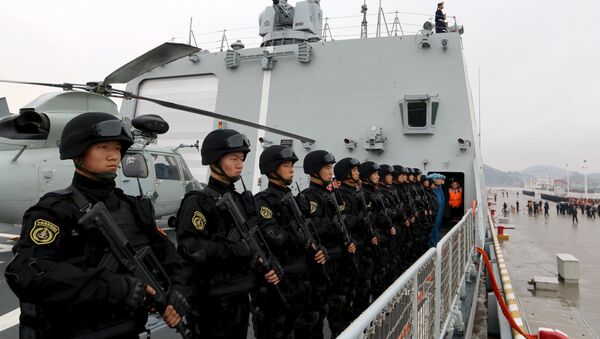 "China will unswervingly follow the path of peaceful development, pursue an independent foreign policy of peace and a national defense policy that is defensive in nature, oppose hegemonism and power politics in all forms, and will never seek hegemony or expansion," the document said.

The world will largely remain peaceful since a world war is unlikely to erupt in the near future, according to China. On the other hand, local wars tearing apart different regions of the world are inevitable.

Playing With Fire: US Unleashes Hybrid 'Proto-War' Against China
The document singled out hegemonism, power politics and neo-interventionism as the greatest threats to world peace. For its part, "China, as a large developing country, still faces multiple and complex security threats, as well as increasing external impediments and challenges," the white paper noted.

Beijing has accused some of its neighboring countries of "[taking] provocative actions and [reinforcing] their military presence on China's reefs and islands that they have illegally occupied," as well as "meddling in South China Sea affairs." This part of the Pacific Ocean is a hotly contested stretch of water, with Beijing claiming that most of the area is its own territory.

Among other security concerns, mentioned in the document, are the United States' growing presence in the Asia-Pacific region and Japan's intent on "overhauling its military and security policies."

"Besides, anti-China forces have never given up their attempt to instigate a "color revolution" in this country. Consequently, China faces more challenges in terms of national security and social stability," the document said.