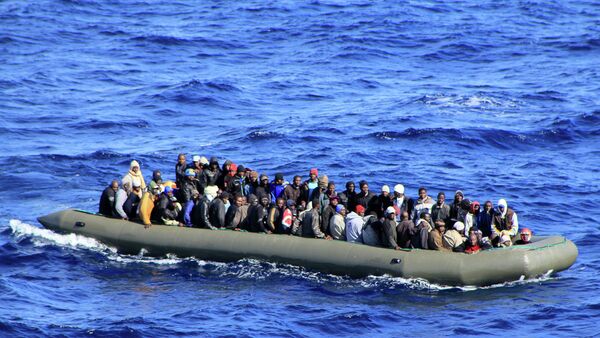 The European Commission has presented a European Agenda on Migration, and is urging the EU members to share out refugees more equally between the European countries amid a growing influx of immigrants from North Africa and the Middle East.

"In a spirit of greater solidarity, we are determined to implement a comprehensive approach that will improve significantly the management of migration in Europe," Migration, Home Affairs and Citizenship Commissioner Dimitris Avramopoulos underscored in an official statement.

EU Refugee Crisis Made by... the EU
The Commission has proposed to outline "by the end of May, an EU-wide resettlement scheme to offer 20,000 places distributed in all Member States to displaced persons in clear need of international protection in Europe with a dedicated extra funding of €50 million [$56 million] for 2015 and 2016."

According to the plan, practically every country within the European Union will be obligated to accept a quota of refugee immigrants, who will be distributed across the European states in accordance with their GDP, population size, unemployment rate and economic strength.

Currently the distribution of refugees within the European Union is highly unequal: five of the 28 EU member states annually receive about three-quarters of all the asylum seekers from abroad. For example, Germany accepted almost one-third of the 626,000 asylum applications in 2014.

As Britain set to opt out, Germany forecast to accept 450,000 asylum-seekers in 1 yr, higher than record (1992) post-Yugoslavia (Times)

However, the proposal has immediately sparked a fierce debate among the EU member states. Although the United Kingdom, Ireland and Denmark could not be obliged to participate in Brussels' initiative in accordance with extant EU treaty rules, these countries have also found themselves involved in the discussion.

"We will not participate in any legislation imposing a mandatory system of resettlement or relocation," the UK government spokesperson underscored.

Inside Ukraine's Little-Known EU-Funded Prison Network
At the same time, Danish Foreign Minister Martin Lidegaard has expressed his dissatisfaction with the fact that that Denmark's opt-out will keep the country out of the EU's joint plan aimed at a solution of the migrant problem.

"In Denmark we have had a debate about the EU that makes it so that we need to underline the fact that this entire area is something that we will absolutely not leave to the EU," Martin Lidegaard said in an interview with a local media outlet.

However, Danish Eurosceptics do not share the sentiment of the Foreign Minister, pointing to the fact that Denmark was granted four opt-outs from the 1992 Maastricht Treaty, including defense, home affairs and citizenship rules.

"The European idea that somebody allows refugees into their own country and then distributes them to other member states is mad and unfair," Hungary's Prime Minister Viktor Orban emphasized in a radio interview.

The Czech Republic strongly opposes the EU refugee quota project as well. According to the plan, the country would be obliged to accept about 525 asylum seekers on a regular basis, while processing the refugee requests of about 10,000 more.

"We are willing to help. But we want to do so on a voluntary basis and on the basis of our own sovereign decision… There are no rules, and no limits, that would prevent such migrants – if they are divided up in a quota system – from travelling on to countries that have a much higher standard of living and higher social benefits, and where they have relatives or coreligionists," Prime Minister Bohuslav Sobotka elaborated.

Simultaneously Estonia has signaled that it is not ready to accept 326 asylum seekers from the Middle East and North Africa on a permanent basis.

Thousands of Migrants 'Disappear' in Sweden After Deportation Orders
According to Monika Haukanomm, Estonia's Free Party representative, it is not fair to oblige Estonia to take in 326 people while Finland's mandatory quota comprises 290 asylum seekers. It is an unfair approach to assign these quotas in a form of an order, she underscored.

In his turn, Marko Mihkelson, the head of Estonia's Parliament's National Defense Committee, pointed out that the root of the refugee problem lies deep in the current Middle Eastern political crisis. According to him, the European Union should put more effort into the resolution of the conflict on the ground in the Middle East and North Africa. Moreover, he believes that those asylum seekers who were forced to flee their countries due to economic hardships but were not affected by a war should be sent back home.

Meanwhile, the European Commission proposal has received high praise from Austria, Germany, Italy and Sweden, which are seeking to ease their burden as the nations, accepting the largest number of asylum seekers within the European Union.