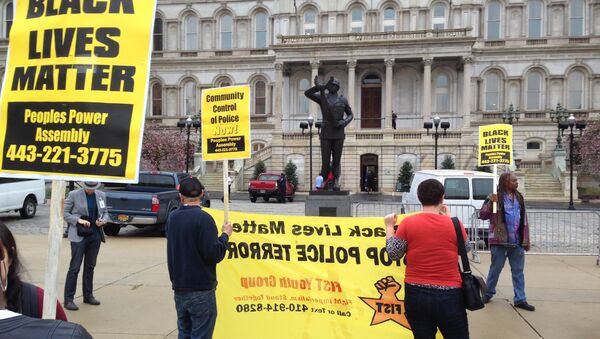 © AP Photo / David Dishneau
Subscribe
Protests broke out in Baltimore, Maryland on Tuesday night, over the death of Freddie Gray, a 25-year-old black man, at the hands of white police officers.

Gray died Sunday after a week in hospital with a severed spinal cord. Witnesses captured part of the police encounter on cellphone video, recording screams as police dragged Grey into a van.

Protesters are not only upset by the actions of local police, but also by the mainstream media's coverage of the events. Fair warning: the following video contains graphic language.

Activists are demanding that police hand over any footage pertaining to Gray's custody.

"We are in close contact with local organizers in West Baltimore and will be of support," Linda Sarsour, Co-Chair of the advocacy group March2Justice, told Sputnik. "They are organizing a vigil tonight, will be demanding transparency and release of footage while Gray was in custody."

So far, one arrest has been made during the protests.

Protests in Baltimore have been steady since Gray’s death, seeking an explanation and accountability for the police officers’ actions.

"You call 911 on your next door neighbor’s son for being on the corner and he ends up dead in the ambulance…you feel a certain way where you don’t want to bring Baltimore policing in your own area," Ray Kelly of local community group No Boundaries, told CBS Baltimore.

"Justice is not just convicting the officers or getting a settlement for Brother Gray's family or anything like that," he added. "Justice is changing the policies and creating the legislation so we don't have to go through this every time there is this type of situation."

The US Justice Department announced earlier on Tuesday that it would launch an investigation into incident, looking for signs of potential civil rights violations.

The six officers involved in Gray's arrest have been suspended. Lt. Brian Rice, the senior officer on the scene, said that Gray and another man fled on foot after making eye contact with his team of officers. Officer Garrett Miller, another of the officers involved, claimed that Gray was carrying a switchblade knife, and his "statement of charges" said that "the defendant was arrested without force or incident."

"We have no evidence — physical, video or statements — of any use of force," deputy police commissioner, Jerry Rodriguez, said during a news conference on Monday. "He did suffer a very tragic injury to his spinal cord, which resulted in his death. What we don't know, and what we need to get to, is how that injury occurred."

Gray's death brought to mind similar incidents in recent months. The death of unarmed black teen, Michael Brown, at the hand of a white police officer, launched a number of protests across the country. Focusing on police brutality, other protests followed the failure of grand jury's to convict white officers involved in the death of Eric Garner in New York City.