Trans-Atlantic Trade Deal Slammed as US Push for World Domination 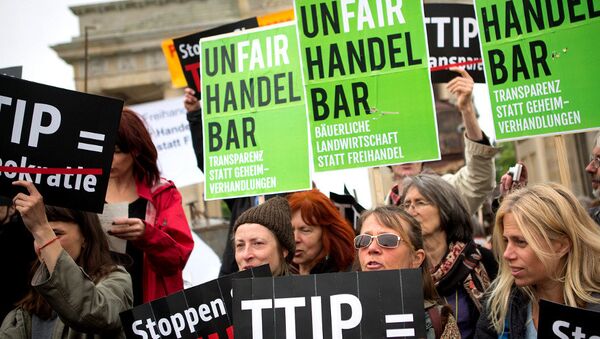 The latest round of negotiations between the EU and the US on a Transatlantic Trade and Investment Partnership (TTIP) is underway amid growing controversy over its consequences for European businesses and consumers.

The TTIP could lead to the world's largest free-trade area. Yet, although this could help to boost economic growth and create jobs on both sides of the Atlantic, there are concerns about the consequences the deal could have.

The European Commission has been negotiating with the US since July 2013 and its latest report says the agreement, if validated, has significant potential for small and medium sized enterprises.

"Small and medium-sized enterprises are the backbone of the European economy. These companies will channel the benefits of TTIP back to their local communities. That's why the EU and the US are working to deliver an ambitious agreement that meets their concerns."

"This report helps us do that, by pointing out the concrete obstacles and the problems that we have to solve. This is one of the issues to be discussed when our negotiators are meeting this week."

@MalmstromEU @EU_TTIP_team Who is going to be affected the most when a corporation decides to prosecute a EU state? Not small businesses?

#TTIP is a threat to jobs, small businesses, NHS & more… What is your MP telling you about it? Ask them. http://t.co/DzM4vpeeN2 #NoTTIP

The report found that SMEs are already big winners from transatlantic trade. 150,000 SMEs were exported to the United States in 2012, accounting for 28% of all EU exports there. SMEs in sectors linked to food, beverages & agriculture; clothing, textiles & leather; as well as chemicals had an above-average share of EU exports.

"The US Push for World Domination is Unacceptable"

However, opposition to the TTIP is particularly high in Germany, in part due to rising anti-American sentiment linked to revelations by ex-National Security Agency contractor Edward Snowden (now living in Moscow) of US spying and fears of digital domination by firms like Google.

A recent YouGov poll showed that 43 percent of Germans believe TTIP would be bad for the country, compared to 26 percent who see it as positive.

The level of resistance has taken Chancellor Angela Merkel's government and German industry by surprise, and they are now scrambling to reverse the tide and save a deal which proponents say could add $100 billion in annual economic output on both sides of the Atlantic.

Helmut Edelhauesser, a 52-year-old from Brandenburg, said he would prefer a free trade deal with Russia. "The US push for world domination is unacceptable," he told Reuters.

"Obama sends out drones to kill people and wins the Nobel peace prize. This has to stop."

After the excesses of the Gestapo secret police under the Nazis and the Stasi in communist East Germany, Germans are also particularly sensitive to official surveillance. Revelations in 2013 that the US had bugged Merkel's mobile phone provoked outrage across the country.

The TTIP is also seen as a threat to the Eurasian Customs Union, originally formed in 2010 and designed to remove trade barriers and harmonize tariffs between Russia, Belarus, Kazakhstan, Armenia and Kyrgyzstan.